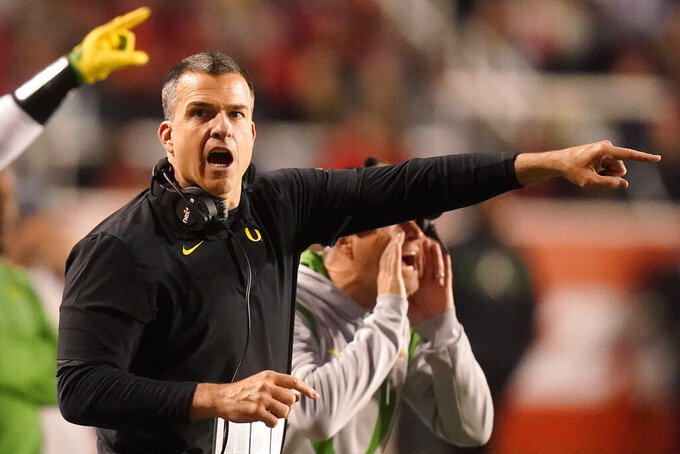 Just three days after losing the Pac-12 championship and their chance to salvage an up-and-down season with a Rose Bowl berth, the Oregon Ducks are looking for a new coach.

Mario Cristobal became the head coach at Miami on Monday, returning to his alma mater, and Oregon athletic director Rob Mullens said his phone was “blowing up.”

“There’s no shortage of interest,” he said. “And so for us, it’s about finding the right leader. We’ve got incredible support inside the program, outside of the program, and we’ll lean on those folks as well. So Oregon football is going to be better than ever. We’re going to crank up the search this afternoon. We will find the next great leader of Oregon football. I mean just look back the last 10, 12 years. The results speak for themselves.”

Mullens said the Ducks attempted to retain Cristobal but did not discuss the terms of any offers. He also said Miami never reached out to him as a courtesy to express its interest.

On Monday night, Oregon named assistant Bryan McClendon, pass game coordinator and wide receivers coach, as interim coach to lead the Ducks into the Alamo Bowl, where No. 15 Oregon will play No. 14 Oklahoma on Dec. 29.

Cristobal's departure comes during a strange season for the Ducks (10-3).

Oregon climbed into the national championship conversation with a 35-28 victory over then-No. 3 Ohio State in the second week of the season.

While the Ducks later stumbled in a loss to Stanford on the road, they were still in the College Football Playoff picture until a 38-7 drubbing by Utah in the second-to-last game of the regular season.

“We disappointed ourselves as a staff, as a team. Found a way to win 10 games despite a lot of injuries, had some really bright moments. Got one of the best road victories in the country this year and then had a couple of disappointing losses. But end up with 10 wins on the season, end up winning the North division and gave ourselves an opportunity to win our third straight Pac-12 championship but we didn’t get it done,” Cristobal said following the game.

Cristobal, 51, went 35-13 as head coach of the Ducks. The Ducks won the Pac-12 championship twice during his tenure and went to bowl games in each of his four full seasons. Cristobal was named AP Pac-12 Coach of the Year in 2019.

Oregon has lost its last two coaches to jobs in Florida. Cristobal's predecessor, Willie Taggart, departed after just one season in Eugene for the head coaching job at Florida State.

“Mario here in four years as a head coach had tremendous success and obviously created a culture, recruited at a high level and produced results on the field. So that was a success,” Mullens said. “Would you like to maintain some continuity? Sure. But our priority is to find a strong leader that others absolutely would be interested in because that means you’re having success and you’re doing it the right way.”

At least one recruit has already decommitted from Oregon in the wake of Cristobal's departure. Tanner Bailey, a four-star prospect at quarterback from Alabama, announced his decision on Twitter.