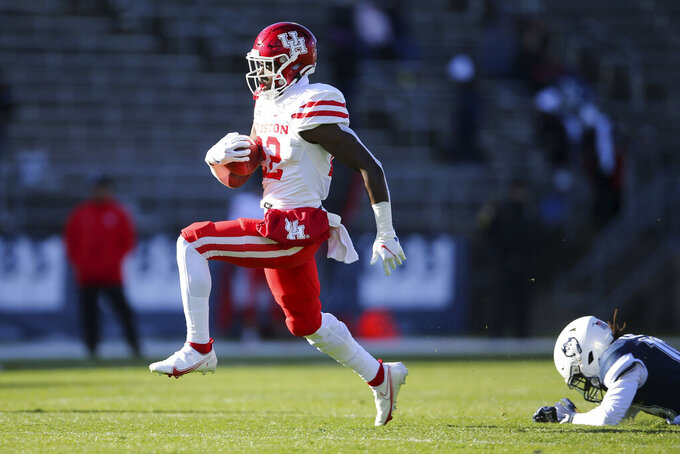 Houston running back Alton McCaskill (22) scores a touchdown as Connecticut defensive back Durante Jones (19) fails to makes a tackle during the first half of an NCAA football game, Saturday, Nov. 27, 2021, in East Hartford, Conn. (AP Photo/Stew Milne) 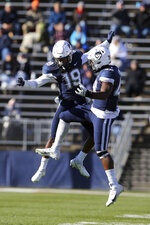 Clayton Tune threw for 301 yards and four touchdowns Saturday as No. 19 Houston completed its regular season with a 45-17 win over UConn in cold and windy conditions.

Nathaniel Dell caught two touchdowns and Jake Herslow and Jeremy Singleton each topped 100 receiving yards to go with a TD apiece for Houston (11-1, 8-0 AAC), which plays at No. 4 Cincinnati for the conference title next Saturday.

Freshman Alton McCaskill had a 31-yard touchdown run, his 16th of the year for the Cougars, but left the game in the second quarter holding his right shoulder. He finished with 54 yards on the ground.

The Cougars led 21-10 at halftime and scored on their first four possessions of the second half to put the game away.

Tune completed 20 of his 31 passes in three quarters of work.

“It’s going to be cold up there (in Cincinnati) and that’s something we’re not used to,” Tune said. “So, it’s good to get out here and play in the cold and get used to it. I think we’ll be ready for it next week.”

UConn's Steven Krajewski had a 34-yard touchdown pass to Kevens Clercius before leaving the game in the second quarter with an injury. He was replaced by Micah Leon, who completed 10 of 13 passes for 62 yards for the Huskies (1-11).

UConn has lost 14 consecutive games against FBS opponents and 36 of its last 37 such games.

UConn: The Huskies introduced new coach Jim Mora at a news conference before the game. The former NFL and UCLA coach takes over the program on Monday.

“I like to go uphill,” Mora said. “I like things that are hard. Hard things motivate me. So, this is just another chance to walk up a hill.”

Houston: The Cougars won all six of their away games this season, the fifth time in program history the team has been undefeated on the road, joining the 2011, 1988, 1979, and 1952 teams.

Houston had seven sacks, bringing its season total to 43.

“That's ridiculous,” said Logan Hall, who was credited with half a sack and also blocked a field goal in the first half. “Our 2s and 3s went out there and on their first or second play they knocked him down, so I'm really proud of how we performed.”

Houston put up 472 yards of offense, including 323 in the air, while holding the Huskies to 238 yards.

McCaskill and Dell each left the game with injuries. Tune also got banged up, hitting his throwing hand on an opponent's face mask. But Holgorsen said he doesn't foresee any of them missing next week's title game.

“We will be as healthy as we've been all year,” he said.

Houston wasn't overly impressive, but a four-touchdown win solidified it as a Top-20 program going into a game with much bigger stakes.

Houston: The Cougars face the undefeated Bearcats next Saturday.

UConn: The Huskies' season is over.