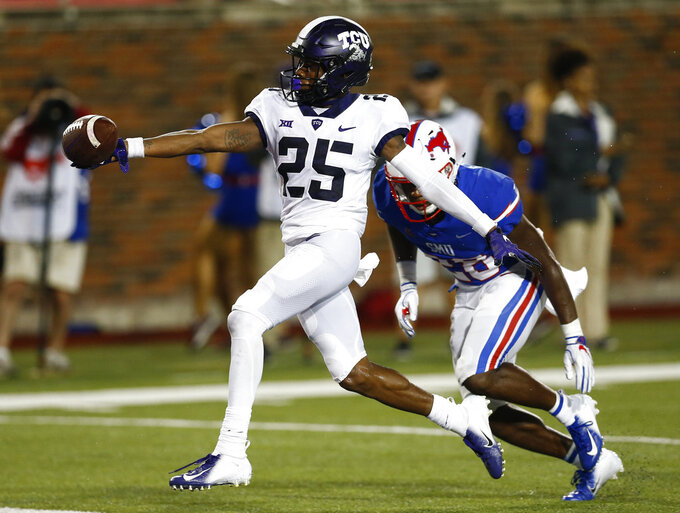 FILE - In this Sept. 7, 2018, file photo, TCU wide receiver KaVontae Turpin (25) scores a touchdown after a catch against SMU during the fourth quarter of an NCAA college football, in Dallas. TCU receiver and standout returner KaVontae Turpin has been dismissed from the team after a second similar charge surfaced following his weekend arrest on an assault charge for an alleged altercation with his girlfriend. Coach Gary Patterson said Tuesday, Oct. 23, 2018, that Turpin will no longer be allowed to be on the team.(AP Photo/Jim Cowsert, File) 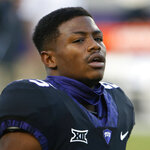 FORT WORTH, Texas (AP) — TCU receiver and returner KaVontae Turpin was dismissed from the team Tuesday after a second charge surfaced against him following his weekend arrest on an assault charge for an alleged altercation with his girlfriend.

Coach Gary Patterson initially suspended Turpin after the senior was arrested by Fort Worth police following an incident Saturday night. But Turpin was kicked off the team after Patterson later learned of a battery charge pending against him in New Mexico from last March.

"Our players are like our kids, just like my own sons, but the bottom line is if they cross the line, then there's always a penalty to be paid," Patterson said. "It's not something that can be tolerated."

When Turpin failed to appear for a pretrial hearing in July, a bench warrant was issued by a Las Cruces magistrate judge.

Patterson said Tuesday that he knew about a property damage allegation in the spring, but that records obtained by the team from New Mexico then didn't list the battery charge that was also part of the case. The coach said he also didn't know until Monday about the out-of-state bench warrant.

"I've got the sheet right here, criminal property damage, bond amount zero," Patterson said during his weekly media availability, holding up the copy of the report he received in March.

Asked if Turpin faced any team discipline then, the coach responded: "Not knowing exactly about what happened, no."

A statement Tuesday from the university, not the athletic department, said the "football staff was aware there was an incident in New Mexico, but not that charges included an alleged battery. The publicly available information they reviewed at the time only showed a charge related to property damage."

University officials said they were unaware until Monday that Turpin's legal issues there were unresolved. The Fort Worth Star-Telegram first reported the New Mexico case.

According to a criminal complaint obtained Tuesday, a Las Cruces police officer wrote that Turpin grabbed and bruised both arms of the victim, ripped her shirt and slammed her phone on the counter, causing the screen to break. Turpin admitted to the officer that he slammed the phone down.

The victim's name was redacted from that report, but the officer wrote that Turpin and the victim had been in an ongoing personal relationship for approximately four years.

That is believed to be the same woman that Turpin was with Saturday night when, according to an arrest affidavit, he was charged with assault causing bodily injury to a family member after Fort Worth police responded to a domestic disturbance call at an off-campus apartment complex.

In the Fort Worth affidavit, a 22-year-old woman who said she had been in a relationship with Turpin for five years told police he "dragged her across the parking lot" and that "he slammed her to the ground," causing her pain. She eventually got away and knocked on a neighbor's door, asking them to call police.

The arrest Saturday night came hours after Turpin had a 99-yard kickoff return for his school-record sixth career special teams touchdown and a 41-yard TD catch in TCU's 52-27 home loss to Oklahoma on Saturday. He was second in the Big 12 in all-purpose yards with 132.7 yards per game.

Police said a witness who lived at the complex said he and two friends heard screaming in the parking lot and then saw Turpin "manhandle" the woman "by grabbing her from behind with one arm across her neck, her feet dragging as she kicked and yelled at him," according to the affidavit.

There was no information on an attorney for Turpin, who could face up to a year in prison and a $4,000 fine if convicted of the Class A misdemeanor in Texas.

The New Mexico records indicate a public defender there as his attorney.