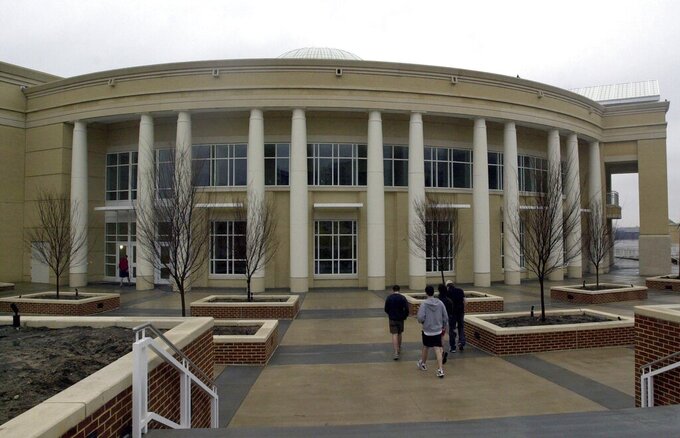 FILE - In this March 1, 2003, file photo, University of South Carolina students head towards the 192,000-square-foot Strom Thurmond Wellness and Fitness Center in Columbia, S.C. Some of the University of South Carolina's most prominent recent athletes are calling for the renaming of the $38.6 million complex, arguing that its namesake shouldn't be glorified for his segregationist views. (Renee Ittner-McManus/The State via AP, File)

COLUMBIA, S.C. (AP) — Some recent standouts in University of South Carolina athletics are asking the school to change the name of its showpiece fitness center, arguing that the late U.S. Sen. Strom Thurmond shouldn't be honored in such a way due to the segregationist views he once held.

The Presidential Commission on University History received testimony Friday on calls to rename the Strom Thurmond Wellness and Fitness Center from such former South Carolina stars as Marcus Lattimore and Moe Brown in football and track and field's Natasha Hastings.

The Black student athletes are among the signatories to a memo also asking the university to remove from its campuses "the names of Confederate supporters, racists, misogynists, and those who outright advocated for the subjugation of any person’s life.”

Thurmond died in 2003 at age 100. He represented South Carolina in the U.S. Senate for 48 years, running for president in 1948 as a segregationist “Dixiecrat.” In opposing the 1957 Civil Rights Act, he staged the longest filibuster ever by a single American senator, speaking for a total of 24 hours and 18 minutes.

Not long after his death, a mixed-race woman whose mother was the Black maid to the Thurmonds came forward to say she was Thurmond's daughter. Though Thurmond never publicly recognized Essie Mae Washington-Williams as his daughter, his family ultimately acknowledged her claim.

Thurmond was well known into his latter years for his daily exercise regimen — sometimes conducted in his congressional offices — and he donated $10,000 toward construction of the $38.6 million fitness center, with most of the remaining cost funded by student fees. Opened in 2003, it is simply called “the Strom” by students on the Columbia campus.

A multitude of buildings and roadways throughout South Carolina also bear Thurmond's name, and a prominent statue of him is on the Statehouse grounds.

Calls to rename the Thurmond fitness structure have been mounting. The push comes after weeks of national protests against racism and police brutality following the Minneapolis death of a Black man, George Floyd, in police custody. Those protests led to calls to pull down monuments around the U.S. to divisive or racist figures.

Another outgrowth is the tasking of a history commission, formed by university President Bob Caslan, to take a broad look at the history of racism at the university and consider recommendations for name and other changes.

South Carolina's Heritage Act — passed in 2000 as part of a bill that removed the Confederate flag from atop the Statehouse — specifies that only the state Legislature can rename historical entities, protecting a wide array of monuments, roads and structures “named for any historic figure or historic event.”

Earlier this year, University of South Carolina leaders sought a legislative exemption to rename a dorm bearing the name of J. Marion Sims, known as the father of modern gynecology but who also did invasive, experimental treatments on enslaved women. At that time, a petition drive to rename the Thurmond complex emerged, pushed by former athletes including Lattimore, the Gamecocks’ former record-setting running back who led the team to its only Southeastern Conference Eastern Division title in 2010.

In a statement provided to The Associated Press, Lattimore said he supported removing Thurmond's name as part of an effort to no longer “celebrate those whose ideals represented division and inequality.”

“We cannot run from the fact that Mr. Thurmond's ideas were divisive. That is not equality, that is not inclusion, that is not empathetic," Lattimore told the commission Friday. "And most importantly, that is not what we represent as a university.”

Dawn Staley, who has coached both the Gamecocks' and Olympic women's basketball teams to respective titles, told the AP that removing Thurmond's name “demonstrates to the families who once lived and worked on the grounds upon which the building stands that we, as a University community, will not honor racist individuals.”

Moe Brown — a former Gamecock wide receiver, currently the Democratic nominee challenging U.S. Rep. Ralph Norman — said that while the university “is taking great strides,” Thurmond's beliefs “were consistent of the bigoted, racist and segregationist mindset that was deeply rooted in the South."

These characteristics, Brown told the AP, “are not consistent with the virtues” of the university.

Sprinter Natasha Hastings, who ran for the Gamecocks and twice won Olympic gold, said that as a student, she remembered walking into the facility and having an "uneasy feeling,” adding that she avoided the building “knowing the history behind Strom Thurmond, the man.”

To the commission Friday, reigning Miss USA Cheslie Kryst, a former Gamecock track and field athlete, said that, while Thurmond “reversed course” on some of his stances toward the end of his life, “his earlier choices were really grave, and they absolutely should exclude him from having his name on a building on the campus of the University of South Carolina.”

Meg Kinnard can be reached at http://twitter.com/MegKinnardAP.