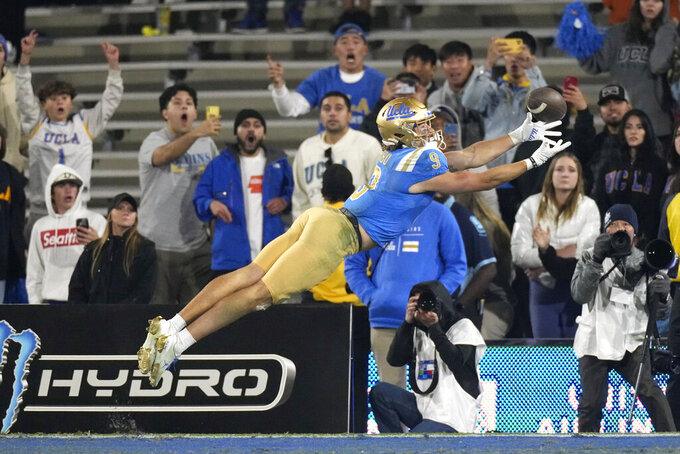 UCLA wide receiver Jake Bobo is unable to hold on to a ball thrown to the end zone with no time left in an NCAA college football game against Arizona Saturday, Nov. 12, 2022, in Pasadena, Calif. Arizona won 34-28. (AP Photo/Mark J. Terrill)

SAN FRANCISCO (AP) — The University of California Board of Regents has scheduled a special meeting for Dec. 14 in Los Angeles to finalize a decision on UCLA's planned move to the Big Ten Conference.

Regents set the date during a meeting in San Francisco on Thursday, the second public session where the move was debated.

UCLA announced on June 30 that it was leaving the Pac-12 for the Big Ten in 2024, a decision that quickly drew the ire of Gov. Gavin Newsom.

In 1991, campus chancellors were delegated authority by the UC Office of the President to execute their own contracts, including intercollegiate athletic agreements. But the regents heard during an August meeting that they retain the authority to review decisions impacting the UC system, meaning they could affirm, overturn or abstain from following up on UCLA's decision.

The University of Southern California is also moving to the Big Ten, but it's a private institution and not part of the UC system.

UCLA chancellor Gene Block and athletic director Martin Jarmond took questions Thursday from the regents on the benefits of the move and their concerns.

A report published by the regents for this week's meeting estimates that UCLA will see $60 million to $70 million in additional revenue from the Big Ten's new media rights deal that begins next year. Even factoring in the additional expenses, the Bruins would still see a significant windfall compared to the $34.3 million in media rights and conference distribution it received in 2020, according to the report.

The Pac-12 is also negotiating a new media rights deal, but it is not expected to come close to what the Big Ten receives.

Initial responses to a survey commissioned by the regents showed many of the UCLA athletes who had participated favored the move. Out of 111 athletes who responded, 35% said joining the Big Ten would be a good idea compared to 7% who thought it was a bad idea. More than one-third of the respondents (38%) said they needed more information and 20% had no opinion.

Nearly 600 surveys were sent out and the regents are hoping more are returned before next month's meeting.

The regents could require UCLA to pay Cal an exit fee for leaving the Pac-12 or share TV revenues they will gain from a move. UCLA and Cal have played each other in football since 1923.