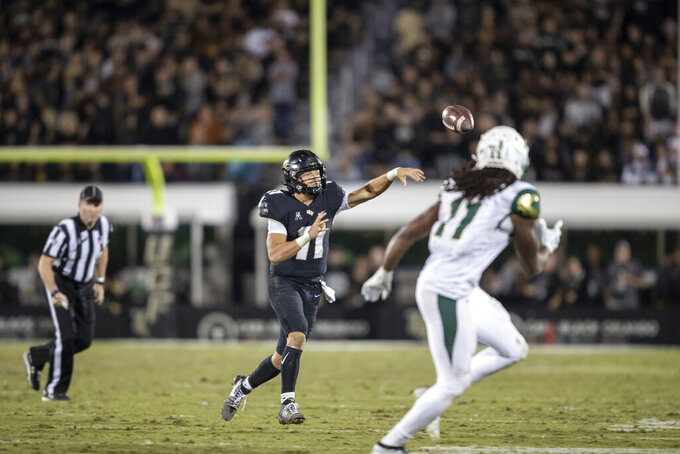 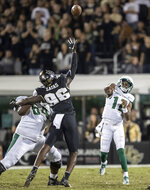 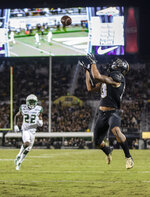 ORLANDO, Fla. (AP) — Dillon Gabriel threw for 270 yards and two touchdowns, Adrian Killins rushed for 115 yards and a touchdown, and UCF concluded its regular season with a 34-7 win over South Florida in the War on I-4 on Friday night.

The Knights (9-3, 6-2) were never seriously tested, as they built a 24-0 lead by halftime with a 35-yard touchdown run from Killins and a 32-yard scoring reception from Gabriel Davis. They erased any lingering doubt as to the outcome when they drove 82 yards for another touchdown immediately after USF finally got on the scoreboard in the third quarter.

“I was just running with a chip on my shoulder out there,” said Killins, a senior. “This was my last game in the Bounce House, my last time playing with my brothers on my left and right. It was a great feeling going out there and competing.”

UCF gained 495 yards to the Bulls’ 181 through the first three quarters. The disparity narrowed to 539-250 after a fourth quarter in which the final margin was all that was left to be determined. The Bulls committed three turnovers, while the hosts committed none.

“I thought our defense was suffocating the entire night,” Knights coach Josh Heupel said. “Our defensive line changed the line of scrimmage.”

UCF: The Knights’ ascendancy as a program has coincided with a marked shift in results in the War on I-4 rivalry. While USF leads the overall series 6-5, UCF won for the fifth time in the seven meetings between the schools since the Knights became members of the American Athletic Conference.

USF: The Bulls seemed out of sorts at times, committing four false start penalties in the first quarter alone. USF concluded 2019 with five losses in its final six games, falling to 4-14 since starting the 2018 season 7-0. As a result, coach Charlie Strong’s job may be in jeopardy.

Strong referred to the season as “very disappointing, very frustrating” after Friday’s loss. Asked directly if he expected to return next season, Strong said he had “no idea.”

Tempers flared between the Sunshine State rivals on a few different occasions, both before and during the game. The most noteworthy incident came with 50 seconds remaining in the second quarter, when Killins was taken to the turf a few seconds after USF’s Antonio Grier had stopped his progress.

Killins grabbed the facemask of USF’s Nick Roberts as he went down, and a scuffle ensued. Killins was penalized for his actions, and after an extended delay while officials discussed the incident, multiple players from both teams drew offsetting unsportsmanlike conduct flags.

“It’s emotional, the rivalry, right?” Heupel said. “The focus from the fans, our kids can sense and feel that energy. They know this is talked about 365 days a year. They know there’s a trophy that, this year, will be inside our building. And they know these guys on the other side of the line of scrimmage. They grew up playing against a lot of these guys. So, it’s an emotional game. It has been chippy in the past, and it got chippy tonight too.”

UCF: Awaits the announcement of its destination and opponent for the program’s 11th bowl game appearance. The Knights have earned a bowl bid in seven of their last eight seasons.

USF: Awaits the start of spring practice, as its season ended with Friday’s loss.