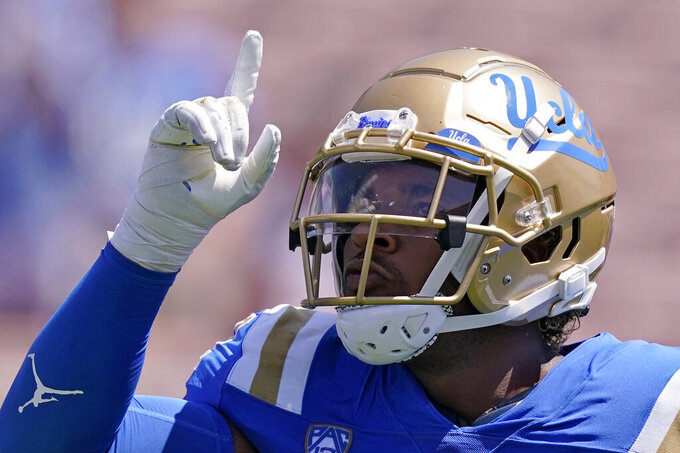 LINE: No line, according to FanDuel Sportsbook.

The Bruins will try to avoid the mistakes that put them in an early hole against Bowling Green before pulling away for a 45-17 win in their season opener. First-year coach Eddie Robinson Jr. brings the Hornets to the Rose Bowl for UCLA’s first game against a historically Black university and a program from outside the Football Bowl Subdivision.

UCLA’s interior offensive line vs. Alabama State DT Brandon Gaddy. Gaddy has four tackles for loss and two sacks in the Hornets’ first two games, and he won’t be intimidated facing a Power 5 opponent after starting his college career at Maryland. The Bruins weren’t as sharp as they would have liked in pass protection against the Falcons, so center Duke Clemens and guards Jon Gaines II and Atonio Mafi will be looking for a better showing this week.

Alabama State: WR Isaiah Scott. A transfer from NAIA-level Faulkner University, Scott has made an immediate impact. He leads the Hornets with six receptions for 143 yards and a touchdown.

UCLA: WR Kazmeir Allen. It took some time, but Allen seems to be getting the nuances of playing receiver after starting his college career as a running back. He had a career-high 10 receptions for 85 yards against Bowling Green.

UCLA has scored at least 40 points in four straight games dating back to last season, its longest streak since 1998. ... This is the first time Alabama State is playing a team from California. ... Bruins QB Dorian Thompson-Robinson will make his 37th career start, passing Tom Ramsey for fourth-most in school history. ... The Hornets have seven sacks through two games, led by DL Stefon Young-Rolle’s three takedowns. ... UCLA allowed 162 yards to Bowling Green, its lowest total since limiting Arizona State to 122 yards in 2008. ... Robinson played LB in the NFL for 11 seasons with the Houston Oilers, Jacksonville Jaguars, Tennessee Titans and Buffalo Bills before coaching his alma mater. ... Bruins S Stephan Blaylock has started 32 straight games. ... Hornets WR La’Vontae Shenault, a transfer from Colorado, has five receptions for 94 yards.