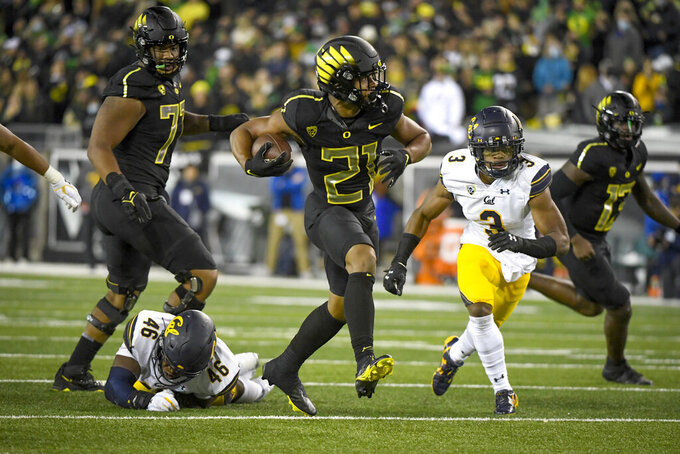 No. 10 Oregon (5-1, 2-1) visits UCLA (5-2, 3-1) in what will be one of the top national games of the weekend. ESPN’s “College GameDay” will originate from UCLA’s campus for the first time. It also marks GameDay’s first visit to a Pac-12 game since Oct. 20, 2018, when the show was in Pullman, Washington, for Oregon-Washington State. UCLA coach Chip Kelly led Oregon for four seasons (2009-12). The Bruins have won two straight. The Ducks, who edged Cal last week, have rushed for at least 180 yards in every game this season.

Washington State (4-3, 3-2) hosts BYU (5-2). The Cougars are playing their first game under interim coach Jake Dickert after Nick Rolovich and four assistants were fired for refusing to comply with a state mandate that all employees get vaccinated against COVID-19. QB Jayden de Laura, who leads the conference with 15 TD passes, has directed the Cougars to three straight wins but they face a tough test against BYU, which has dropped two straight.

Stanford and Arizona State have bye weeks. The Sun Devils are the only team nationally that has not allowed a scrimmage play of 40 yards or more this season. ... Washington (2-4, 1-2) travels to Arizona (0-6, 0-3). The Huskies are one of three teams nationally to score in every red-zone trip this season (11 touchdowns, five field goals). The Wildcats have lost 18 straight. ... Four of Cal's five losses have been by seven points or less, including a 24-17 defeat at Oregon last week. The Golden Bears (1-5, 0-3) host Colorado (2-4, 1-2), which snapped a four-game losing streak with a 34-0 victory over Arizona. It is the first time the Buffaloes have shut out an opponent in Pac-12 play.

Utah (4-2, 3-0) is coming off emotional victories over USC and No. 18 Arizona State after the tragic death of teammate Aaron Lowe, but the Utes have a tough test this week when they go on the road to face surprising Oregon State (4-2, 2-1). The Beavers are looking to go 4-0 at home for the first time since 2012 and are led by running back B.J. Baylor, who is averaging a conference-best 112.8 rushing yards per game.