UCLA seniors, Kelley look to go out with win vs. California 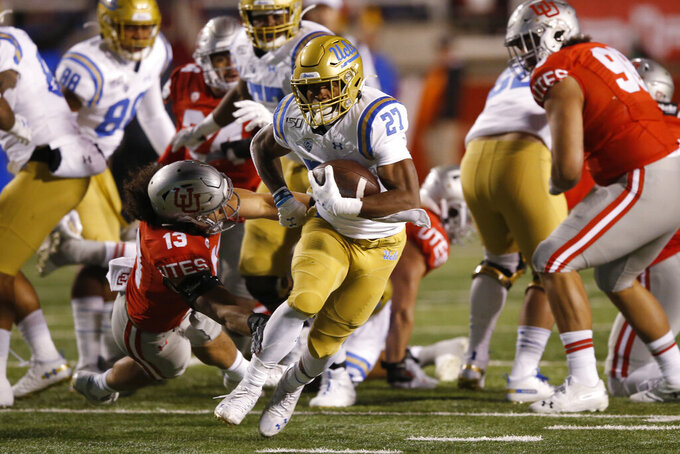 UCLA running back Joshua Kelley (27) carries the ball during the first half of the team's NCAA college football game against Utah on Saturday, Nov. 16, 2019, in Salt Lake City. (AP Photo/Rick Bowmer)

LOS ANGELES (AP) — UCLA’s seniors will play their final college game on Saturday as one of the few classes in school history to have four straight losing seasons. But the Bruins are hoping to at least send the group out with a win when they face California on Saturday night at the Rose Bowl.

UCLA (4-7, 4-4 Pac-12) has only 12 seniors on a roster that is one of the youngest in FBS, but coach Chip Kelly has lauded the group for the way they have worked with his staff during his two seasons leading the program.

“The best thing we can do is go out and try to win to honor those guys because they’ve been outstanding,” Kelly said. “They’ve been the kind of guys you can count on every single day.”

The senior the Bruins are hoping will have another big game is Joshua Kelley, who needs 16 yards to become the eighth running back in school history to have back-to-back, 1,000-yard seasons.

“There’s a lot of motivation. When you play your last game, you dream of playing at home in front of family and friends,” he said. “It is going to be scary but a lot of emotion.”

Kelley is second in the Pac-12, averaging 98.4 yards per game, but was held to a season-low 54 yards in last week’s 52-35 loss at USC. Kelley rushed for 157 yards and three touchdowns in last year’s win over Cal.

Cal (6-5, 3-5) became bowl eligible with last week’s 24-20 win over Stanford. It is the first time the Bears have been bowl eligible in consecutive seasons since 2009. Defensive coordinator Tim DeRuyter said he liked the way everyone came back and focused on UCLA despite the big win. The Bears have dropped five of their last six to the Bruins.

“You’ve got a lot of juice this week at practice,” he said. “I think in a lot of ways it validated our thinking that we’re closing the distance on everyone in this league.”

What else to watch as the Bears look for their first win at the Rose Bowl since 2009:

UCLA quarterback Dorian Thompson-Robinson is questionable after reinjuring his ankle during last Saturday’s loss to USC. The sophomore had 431 yards of total offense against the Trojans (367 passing, 64 rushing), which was his third 400-yard game this season.

Thompson-Robinson has looked more confident as the season has progressed and has displayed how much of a threat he is as a dual-threat quarterback by making more plays with his legs.

Thompson-Robinson returned to practice on Wednesday, leaving some optimism that he might be able to go. Austin Burton would get his second start of the season if Thompson-Robinson is unable to play. Burton, also a sophomore, threw for 226 yards against Oregon State.

Cal is hoping not to see Thompson-Robinson after struggling with mobile quarterbacks in losses to Arizona State and USC.

Cal linebacker Evan Weaver, a finalist for the Butkus Award, leads the nation with 164 tackles and needs four more to surpass Hardy Nickerson for the school’s single-season mark. He has double digit tackles in 17 of his last 18 games.

“He’s an instinctive player who doesn’t get fooled much. He’s always around the ball and can run sideline to sideline,” Kelly said.

A win would give UCLA four in its last six after beginning the season 1-5. Kelly though isn’t concerned if a victory will improve perceptions about the program showing signs of improvement.

The matchup of UCLA’s defense against Cal’s offense pits two of the worst units among Power Five teams.

The Bears are averaging 311.8 yards per game, fifth worst, while the Bruins are allowing 460.3, which is sixth worst. UCLA has allowed 49 or more points in losses to Utah and USC.

UCLA wide receiver Kyle Phillips, who had career highs in receptions (14) and yards (123) against USC. The freshman has 47 catches for 505 yards in his past seven games.

Michael Wagaman in Berkeley, California, contributed to this story.