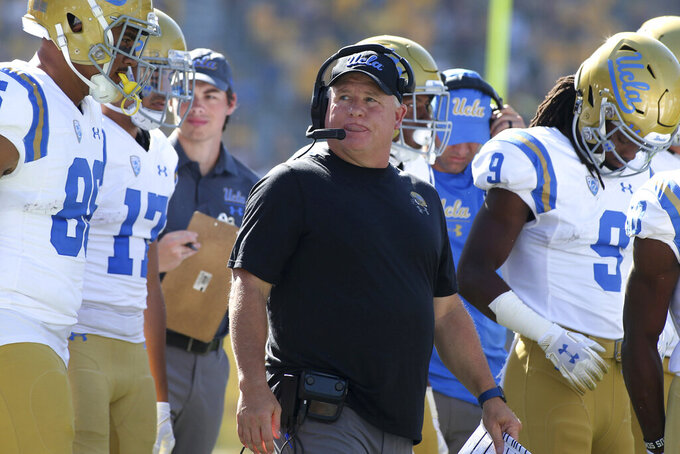 FILE - In this Nov. 10, 2018, file photo, UCLA head coach Chip Kelly, center, walks with his players prior to an NCAA college football game against Arizona State, in Tempe, Ariz. Chip Kelly isn’t a fan of momentum and how it can impact a team, but the UCLA coach admitted that the Bruins performance over the second half of last season, that included a win over crosstown rival USC, provided a boost coming into this year. (AP Photo/Ralph Freso, File)

LOS ANGELES (AP) — Chip Kelly doesn't generally put much stock in momentum but the UCLA coach acknowledges the Bruins' performance over the second half of last season, which included a win over crosstown rival USC, provided a boost coming into this year.

However, Kelly said his group has turned the page as he begins his second season in Westwood.

"You learn from the past, and you can study it a little bit," Kelly said. "But I think if you spend too much time in the past, you become irrelevant in the future."

The offense returns nine starters, including sophomore quarterback Dorian Thompson-Robinson and senior running back Joshua Kelley, who went for 289 yards in the victory over USC.

Tight end Caleb Wilson, who led the team last season in receptions, left early for the NFL but receivers Theo Howard, a senior, and junior Demetric Felton could create some matchup problems due to their speed.

The defense has seven starters returning from a unit that allowed 34.9 points per game last season, sixth-worst among Power Five teams. If there is any hope of improvement, they have to do a better job of pressuring the quarterback. The Bruins had only 15 sacks last year, which tied for second worst among Power Five programs.

The secondary, led by juniors Darnay Holmes and Quentin Lake, was one of the most improved position groups last year.

Here are some other things to know about the Bruins going into the season:

Thompson-Robinson got thrown onto the field early due to injuries and he struggled. He completed only 57.7 percent of his passes in seven starts before suffering a shoulder injury.

The sophomore was recruited as one of the top dual-threat quarterbacks in the nation and should have more confidence this season leading the offense. The offense will also have more experience under Kelly's system. However, there isn't much depth behind Thompson-Robinson — none of the other quarterbacks has taken a snap in a college game.

The line struggled last season as it adjusted to Kelly's spread offense, but there should be improvement this year with four starters returning.

Senior Boss Tagaloa will anchor the line at center while the only spot that remains up for grabs is left tackle. Freshman Sean Rhyan — who was one of the top signings in Kelly's second recruiting class — could end up winning it.

The one area of immediate concern is linebacker. Senior Keisean Lucier-South will miss at least the first three games due to academic issues while fellow senior Tyree Thompson suffered a foot injury a week into practices and is out for an extended period after having surgery.

The Bruins kick off the season on Aug. 29 at Cincinnati, marking the first time since 2012 they are opening on the road against a non-Power Five school.