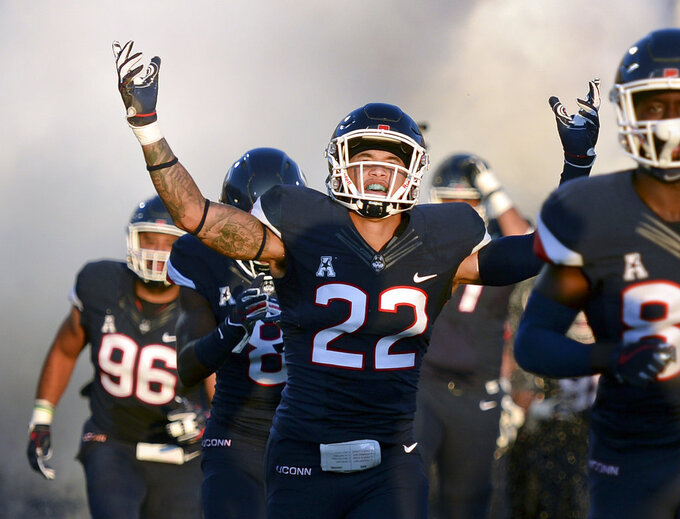 FILE - In this Aug. 30, 2018 file photo, Connecticut linebacker Eli Thomas (22) raises his arms to the crowd as his team enters the field for their season-opening NCAA college football game against Central Florida in East Hartford, Conn. UConn issued a statement Monday, Oct. 15, saying Thomas, a 220-pound junior, was hospitalized after suffering a stroke the preceding Wednesday prior to a weightlifting session. (AP Photo/Stephen Dunn, File)

The school issued a statement Monday saying the 220-pound junior had the stroke Wednesday prior to a weightlifting session.

The school says Thomas was immediately transported to a hospital where he was stable and making "good progress toward recovery."

The school declined to provide any other details, including what activities Thomas had participated in before the stroke.

"Things like this are very unfortunate but it is one of those things where you take one day at a time and do the best you can each and every day because you just never know what can happen," coach Randy Edsall said during a weekly conference call.

The incident comes less than five months after the death of University of Maryland football player Jordan McNair after a team workout.

Thomas' mother, Mary Beth Turner, issued a statement thanking UConn assistant athletic trainers Caitlyn VanWie and Tony Salvatore, writing that if not for their quick response, "this horrible situation could have been devastating."

"To say we are stunned by this turn of events is an understatement!" she wrote. "A strong, healthy, 22-year-old man having a stroke is not anything we anticipated. However, Eli will fight back as he has with every challenge that has come his way with 'Eli Style.'"

Thomas, who is from Elmira, New York, has played this season at linebacker and defensive end, making 11 tackles and recording a key sack in the final seconds that helped the Huskies (1-5) secure their only win of the season over Rhode Island on Sept. 15.

He transferred to UConn from Lackawanna College, where he played with Huskies quarterback David Pindell.

Thomas also has suffered three knee injuries since high school, including one that cost him the entire 2017 season. He has played in just eight games, four at the Pennsylvania college and four this season at UConn.