UGA's 'Hot Rod' Blankenship returns to where legend was born 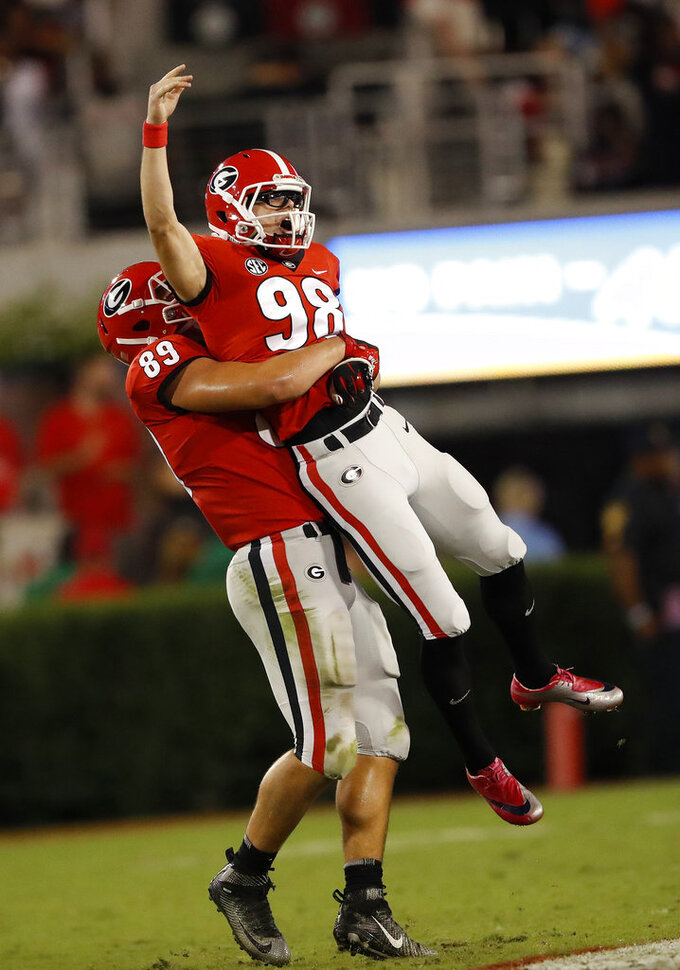 FILE - In this Oct. 6, 2018, file photo, Georgia's Rodrigo Blankenship (98) celebrates with Charlie Woerner (89) after kicking a 53-yard field goal during the second half of an NCAA college football game against Vanderbilt, in Atlanta. While Blankenship goes with a much more subdued pair of wire-rimmed specs away from the field, he definitely needs those black, goggle-like sports glasses to see what he's doing on game day. They're not some sort of fashion statement or marketing gimmick. He's unable to wear contacts, so that's really his only option. (AP Photo/John Bazemore, File)

ATHENS, Ga. (AP) — No one is quite sure how Rodrigo Blankenship sees through those big, thick glasses.

Georgia coach Kirby Smart even tried them on .

"I don't understand eyesight," Smart said, "but I don't see how those could help anybody see."

Clearly, they work just fine for the kicker known as "Hot Rod," who has become one of the sixth-ranked Bulldogs' most reliable players and a bit of a cult hero between the hedges.

Let's start with the glasses.

While Blankenship goes with a much more subdued pair of wire-rimmed specs away from the field, he definitely needs those black, goggle-like sports glasses to see what he's doing on game day. They're not some sort of fashion statement or marketing gimmick. He's unable to wear contacts, so that's really his only option.

"Being able to see important things, like the play clock on a field goal or a kickoff, I need my specs to be able to see that," said Blankenship, who is nearsighted. "To see the uprights from 50 yards away, that's helpful to be able to have a really nice, sharp image. I don't think they hold me back in any other way. They just help me see as clearly as I can and be the best kicker I can be."

Smart doesn't mind how Blankenship looks, as long as he keeps kicking like he has over the past three seasons.

"I know one thing, he sees that ball on the ground, and he gets his toe on the leather real well," the coach said. "So they must work for him."

On Saturday, Blankenship returns to Lexington, Kentucky — the spot where the legend of "Hot Rod" really all began — as the Bulldogs (7-1, 5-1) take on No. 11 Kentucky (7-1, 5-1). The stakes couldn't be any higher: the winner earns a spot in the Southeastern Conference championship game.

Two seasons ago, Blankenship was a largely obscure walk-on who didn't even claim the starting job until the fourth game of the season, after then-No. 1 kicker William Ham missed four of his first seven field-goal attempts.

Then, against Kentucky, Blankenship connected on the first game-winning kick of his career. It wasn't really that dramatic — the chip-shot from 25 yards was little more than an extra point , and neither team did anything special that season — but it was the postgame interview that propelled his popularity.

Blankenship left both his helmets and his glasses on as he faced the camera , which immediately blew up into comparisons to Andy Samberg in the movie "Hot Rod" (the kicker also had a mustache at the time) and the bespectacled Charlie "Wild Thing" Sheen in "Major League."

A social media hashtag, #respectthespecs, became Blankenship's calling card. He did nothing to dissuade the image of the quirky placekicker, also going with pink cleats as his preferred footwear (though he's since added some silver to his collection). He even got a shout-out from Jimmy Kimmel .

"He did a great job in that game two years ago, and I think that certainly gave him the confidence, gave us the confidence in him that he was a pressure player and enjoyed the moment," Smart said.

Blankenship propelled himself to even greater heights in 2017, converting 20 of 23 field goals and all 63 of his extra points, as well as finally earning a scholarship . He was at his best on the biggest stages, setting a Rose Bowl record with a 55-yarder in the national semifinal victory over Oklahoma , and putting himself in position to be the hero of the national championship game when he knocked one through from 51 yards in overtime against Alabama .

Of course, the Crimson Tide threw a winning touchdown pass on second-and-26 to ruin the ending to Blankenship's storybook season. But he's picked right up where he left off, hitting 14 of 18 field goals and remaining perfect on extra points (he's now made 125 in a row over his career).

"He's automatic," said defensive back Tyrique McGhee. "I'd be surprised if he ever missed one the rest of his life. The guy's clutch."

Blankenship still remembers that last trip to Lexington as the game where he really took a giant leap forward as a kicker, even though it wasn't a very difficult kick.

"It was a special moment to go out and do that for that team," he said. "It was an intense moment that gave me a lot more confidence the rest of that season. It gave me something to build off of the rest of the way and it meant a lot that they trusted me in that situation to execute my job."

Blankenship could play another big role in Saturday's game. The Wildcats have allowed only 13 points a game, fewest in the nation, and no team has scored more than 20 against their stingy defense.

If that trend continues, it very well could come down to a kick in the closing seconds.

Blankenship will be ready.

Complete with all his accessories.