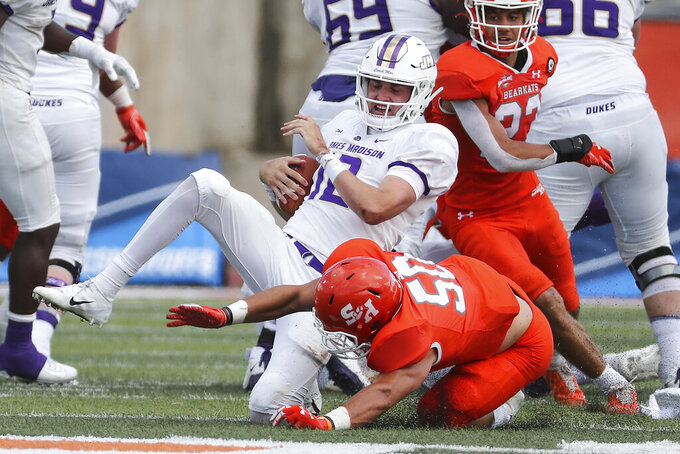 James Madison quarterback Cole Johnson (12) is sacked by Sam Houston State linebacker Ysidro Mascorro (50) during the fourth quarter of a semifinal game in the NCAA college football FCS playoffs, Saturday, May 8, 2021, in Huntsville, Texas. Sam Houston came from behind to edge James Madison 38-35, for a berth in the FCS national championship game. (Brett Coomer/Houston Chronicle via AP)

The longest college football season in history comes to a close this weekend after a grueling, haphazard stretch that saw the Football Championship Subdivision push the majority of its games into the spring for the first time because of the pandemic.

While Bowl Subdivision teams staged a shortened season last fall, the FCS took the unusual step of putting off its games until spring even though some teams had been preparing since last summer. Players and coaches alike say the constant specter of a sudden shutdown for coronovirus protocols made for a mentally exhausting season and one that athletic directors said only slightly mitigated the revenue lost.

But, they add, at least they got to play the games.

South Dakota State and Sam Houston will play for the FCS championship Sunday in Frisco, Texas, capping an abbreviated season marked by high level football and some historic performances, but also dozens of games lost to COVID-19 outbreaks.

The day will also start a countdown that has raised concerns: Many programs will be idle for less than two months before reconvening to prepare for fall football. Coaches have tried to adjust.

South Dakota State played as many as 10 true freshmen, coach John Stiegmeier said, and made concessions on physical contact in practice.

“Our staff decided to really limit the amount of contact we have during practice,” he said.

So, too, did Sam Houston, though coach K.C. Keeler said the toll on his players has been far from just physical.

“We came back in June thinking we were going to be playing in September and then, all of a sudden, that was not on the table,” Keeler said. “And then we’re kind of getting ready for a spring season but now there’s a lot of questions: Are we going to get to a spring season? Are there going to be spikes? It’s been physically and mentally exhausting going through all those ups and downs from June."

Daily or three-times-a-week testing for the coronavirus provided a constant threat to players hoping they could play and coaches hoping they could field a team. Many programs didn't play at all and those that did became familiar with postponements or cancellations.

For James Madison, ranked No. 1 for most of the season, a period of five weeks toward the end of the regular season resulted in four cancellations because of the virus. A twice-postponed game with Richmond rescheduled for the final day of the regular season allowed the Dukes to qualify for the Colonial Athletic Association’s automatic berth in a truncated 16-team playoffs. The Dukes won 23-6 on April 17, the day before the playoff field was set.

The cost of the pandemic won’t be known until fiscal years end in June, several athletic directors said, but the Dukes’ Jeff Bourne had a dire guess at what the coronavirus has cost his program.

“Suffice it to say, the revenue was down 90%-95%, so that’s a tremendous hit,” Bourne said. James Madison not only lost a $600,000 guarantee for a game at North Carolina in the fall, but they were allowed only 250 fans for their first two home games.

One bonus for spring football: exposure. With no Power Five games to compete with, the FCS got more time on television, providing “a real showcase for FCS football,” Richmond AD John Hardt said.

And it rewarded the players who stuck with it. Hardt recalled attending Richmond's first practice in the spring.

“The joy that I saw behind those masks on players’ faces and then in their eyes and coaches, the spring in their step being able to do what they love and they enjoy so much, I think it was a real, real valuable experience.” he said.

And a respite from the relentless uncertainty.

“We’ve been going at it mentally since last March when we all got sent home for COVID when our school got pushed online,” SDSU senior linebacker Logan Backhaus said. “Then we ramped it up in the summer when we came back, were doing COVID checks every single day. We were about ready to start fall camp and then our season gets canceled."

With the Jackrabbits one win away from their first national title, they’ve also heard talk that the championship will carry an asterisk because some leagues and teams opted out of competing altogether.

On Sunday, that struggle will have all been worth it for a first-time national champion.

By Ralph D. Russo 32 minutes ago
an hour ago
3 hrs ago
By Greg Beacham 15 hrs ago
By The Associated Press 20 hrs ago