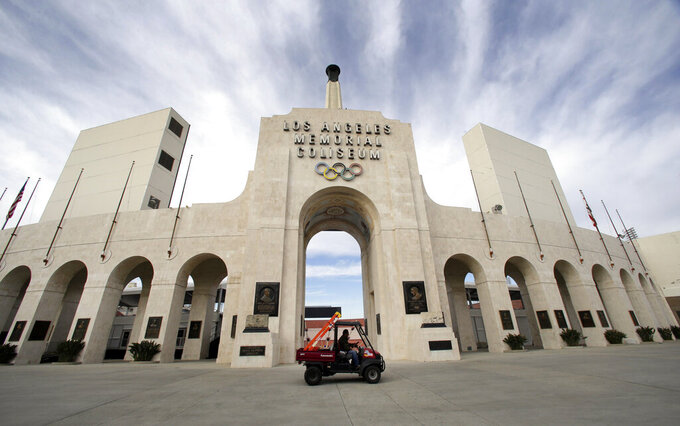 LOS ANGELES (AP) — United Airlines and the University of Southern California have reached a new naming rights agreement for Los Angeles Memorial Coliseum to resolve criticism that placing a corporate name on the stadium would disrespect its history as a monument to troops who fought and died in World War I, the parties announced Friday.

The new 10-year deal names the field rather than the whole stadium, satisfying a key elected official who joined with veterans in opposing the original plan to rename the nearly century-old landmark United Airlines Memorial Coliseum.

Starting in August, the playing field will be referred to as United Airlines Field at Los Angeles Memorial Coliseum, a name that was suggested as an alternative when the controversy boiled up last March, shortly after the centennial of the war's end.

Los Angeles County Supervisor Janice Hahn, the current president of the Los Angeles Memorial Coliseum Commission, said in a statement that the agreement ensures United remains a sponsor of a $315 million renovation and the stadium's legacy.

"I am pleased that USC and United have come together in a way that will honor the memories of veterans who served in World War I and our broader community of veterans," Hahn said.

The commission is a joint city-state-county authority that gave USC control of the stadium in 2012 under a long-term lease that called for massive improvements. The Coliseum is the home field for the USC Trojans football team.

The original deal was reportedly valued at $69 million and would have run 16 years. Terms of the new agreement were not released.

When opposition to the original naming rights agreement surfaced, United quickly pointed out that it had been careful to keep the words "Memorial Coliseum" in the name, but also offered to mutually terminate the deal to respect the wishes of the community.

USC also said at the time that it was open to modifying the agreement.

As part of the new agreement, USC and United are working on other initiatives to honor area veterans, including support for veterans who attend the university and erecting a veterans memorial at the stadium.

"USC is honored to be the caretaker of this Los Angeles treasure and, together with United, we are ensuring the Coliseum's future as a world-class venue," USC interim President Wanda M. Austin said in a statement.

United Airlines' California president, Janet Lamkin, noted that the company has been serving Los Angeles for more than 80 years, many of its customers live in or travel to the area, and many of its employees are veterans.

"We always want to do what is best for the communities in which we operate — and in this case, reaching an agreement which upholds the name of such a respected venue while modernizing it for the benefit of future generations was the right thing to do," she said.

Millions of soldiers and civilians were killed in World War I before it ended in 1918. Los Angeles leaders commissioned the Coliseum as a war memorial in 1921 and it was completed in 1923.

The Coliseum hosted the 1932 and 1984 Olympics and will get the Games again in 2028. It's the temporary home of the NFL's Rams since their return from St. Louis and is a past home of the Los Angeles Dodgers, the NFL's Raiders and the UCLA Bruins.

It hosted the 1967 AFL-NFL Championship — retroactively termed the first Super Bowl — and the 1973 Super Bowl. Three games of the 1959 World Series also were played there.