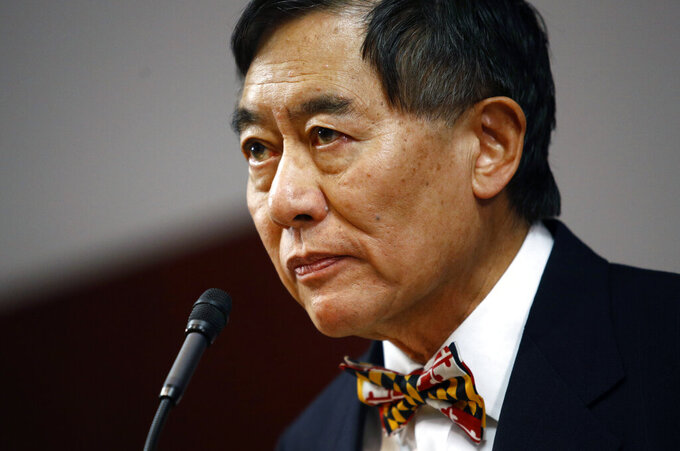 FILE - In this Tuesday, Oct. 30, 2018 file photo, University of Maryland president Wallace Loh speaks at a news conference following the board of regents' recommendation that football head coach DJ Durkin retain his job in Baltimore. University of Maryland President Wallace Loh will remain at the state’s flagship university through June 2020, after he initially announced plans to retire at the end of this school year in the aftermath of a football player’s death. Board of Regents Chair Linda Gooden announced Wednesday, Jan. 30, 2019 that Loh is leading several initiatives critical to the university’s future. (AP Photo/Patrick Semansky, File)

ANNAPOLIS, Md. (AP) — University of Maryland President Wallace Loh will remain at the state's flagship university through June 2020, the chair of the Board of Regents said Wednesday, despite initially announcing plans to retire at the end of this school year in the aftermath of a football player's death after a preseason workout.

Linda Gooden, the chair of the board, said the university is launching the process to select Loh's successor. She said the board has been listening to members of the campus community and leaders across the state about the upcoming leadership transition. She said those discussions informed the board's thinking about ensuring an orderly transition and a successful search process.

"Dr. Loh is currently leading several initiatives critical to the university's future, including implementing reforms to the athletics program, hiring key student-facing leaders, and continuing the capital campaign," Gooden said in a statement.

The university was shaken by the death of 19-year-old offensive lineman Jordan McNair, who died of heatstroke after a May workout. Upheaval in leadership began in November when Loh said he would retire in June 2019, as James Brady, the former regents chairman, said football coach DJ Durkin would keep his job. Backlash prompted Loh to fire Durkin, and Brady resigned the next day.

In the months that followed, Loh received support from Maryland officials and members of Congress, including Maryland Reps. Elijah Cummings and Steny Hoyer. Hoyer told reporters in December that he believed Loh would be "part of the solution to make sure this doesn't happen again."

Loh wrote on Twitter that he has been honored to serve as the university's president for eight years and looked forward to continue working.

"The Board discussed with me having a smooth transition of leadership, and we mutually agreed upon a retirement date of June 2020," Loh tweeted. "With all of Maryland's supporters, I look forward to what we will accomplish together."