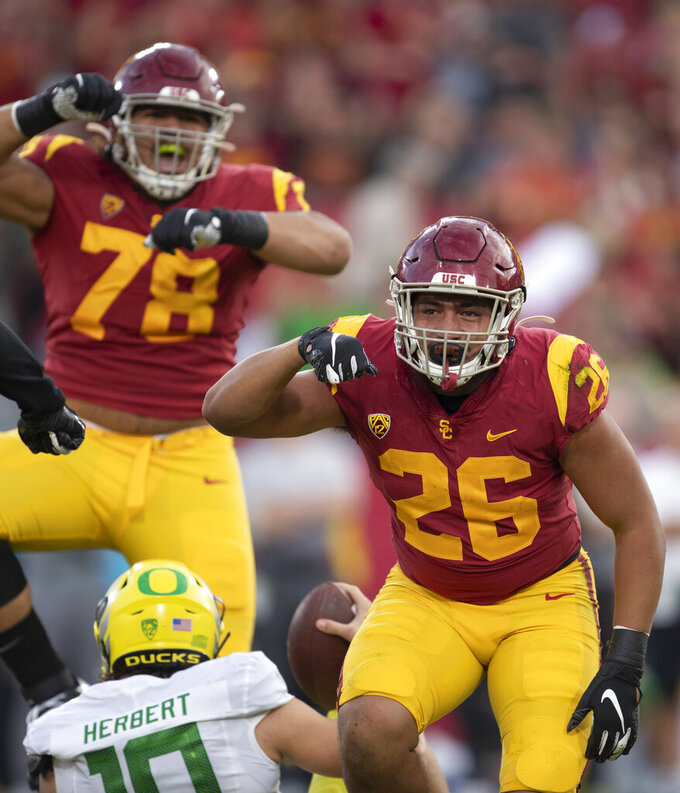 GAME OF THE WEEK: Southern California at Arizona State. Two teams in need of a win meet in the desert Saturday afternoon. The Trojans need it and maybe a couple more to possibly save coach Clay Helton's job. USC (5-4, 4-2 Pac-12) is just one game out of the Pac-12 South lead but is coming off a 56-24 loss to No. 7 Oregon and has a new athletic director in Mike Bohn. The Sun Devils were once in contention for the Pac-12 South title after opening 5-1 and climbing to No. 17 in the AP Top 25. Arizona State (5-3, 2-3) followed with an ugly loss to No. 8 Utah and a road loss to UCLA before its bye week.

MATCHUP OF THE WEEK: Washington at Oregon State. The Huskies (5-4, 2-4) have been called the best 5-4 team in the country. Of Washington's four losses, three have been by less than a touchdown, including 33-28 to Utah last week. The Beavers appear to be ahead of schedule in coach Jonathan Smith's second season, already doubling their win total from a year ago. Oregon State (4-4, 3-2) is coming off a 56-38 road win against Arizona and is two wins from becoming bowl eligible for the first time since 2013.

INSIDE THE NUMBERS: Oregon, Utah, Arizona and UCLA all have a bye week. ... Home teams are 17-17 in Pac-12 play this season. ... Arizona State WR Kyle Williams has a reception in 36 straight games, the fourth-longest active streak in FBS. ... Washington's Peyton Henry (15 for 15) and Washington State's Blake Mazza (13-13) are among seven FBS kickers to remain perfect and meet the minimum qualifications.

PLAYER TO WATCH: Michael Pittman Jr. USC. The Trojans' senior receiver has caught four or more passes in 14 straight games, catching 80 total passes for 1,341 yards and 13 TDs in that span. Arizona State will have its hands full Saturday.

UPSET WATCH: Stanford at Colorado. The Buffaloes have struggled this season, winning just one of their five Pac-12 games. But Colorado is playing at home and still has an offense that can put up big numbers. Of course, doing that against the physical Cardinal defense will be tough. The line is only 3½ points, so oddsmakers are giving Colorado a chance.