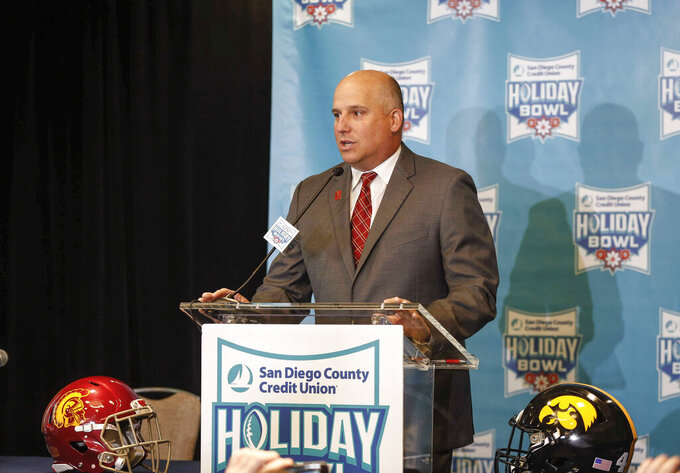 Helton announced the dismissals Saturday, one day after the No. 22 Trojans (8-5) lost 49-24 to Iowa in the Holiday Bowl.

The changes were widely anticipated after new USC athletic director Mike Bohn elected to retain Helton earlier this month. Helton and Bohn promised to make unspecified changes to accompany Helton's return, which is widely unpopular among a large portion of USC's fan base after 12 losses in the last two seasons.

“In evaluating our team’s performance this year and after consulting with AD Mike Bohn, it is evident that these changes are necessary," Helton said in a statement. “Although we did fight through adversity all season and we showed improvement over the previous year, my coaching staff and I fell short of fielding a championship team. We are taking immediate steps to improve our competitiveness and meet the winning expectations of our student-athletes and fans.”

While Pendergast's defenses largely performed solidly during his tenure, his current unit is ranked 77th in the nation in total defense, yielding 408.7 yards per game. USC's statistical performance has declined marginally in each of his four seasons.

The Trojans have been plagued by special teams mistakes in recent years under Baxter, who also returned to the school in 2016 along with Pendergast after a previous stint with the Trojans on Lane Kiffin's staff.

USC gave up a kickoff return for a touchdown in the Holiday Bowl. The Trojans also ranked last (130th) in the nation in kickoff return coverage this season, giving up 29.78 yards per kickoff and two touchdowns.

Those problems compelled Helton to cut ties with Baxter, a longtime friend who also served as the Trojans' tight ends coach this season. They joined USC's staff together in 2010.

Helton replaced much of his offensive coaching staff last year after the Trojans struggled through their first losing season since 2000, and those changes worked. First-year offensive coordinator Graham Harrell recently got a multiyear contract extension after the offense's marked improvement this season.

USC fans are still widely unhappy with the return of Helton after two less-than-impressive seasons. The former interim head coach hasn't restored USC to national title contention in four years with the full-time job, but Bohn praised Helton's leadership and professionalism when he decided to keep the coach in charge.

By Brian Mahoney an hour ago
By Gary B. Graves 4 hrs ago
By Dave Campbell 6 hrs ago
9 hrs ago
By Raul Flores 9 hrs ago