USC defense looks to lead given uncertainty at quarterback 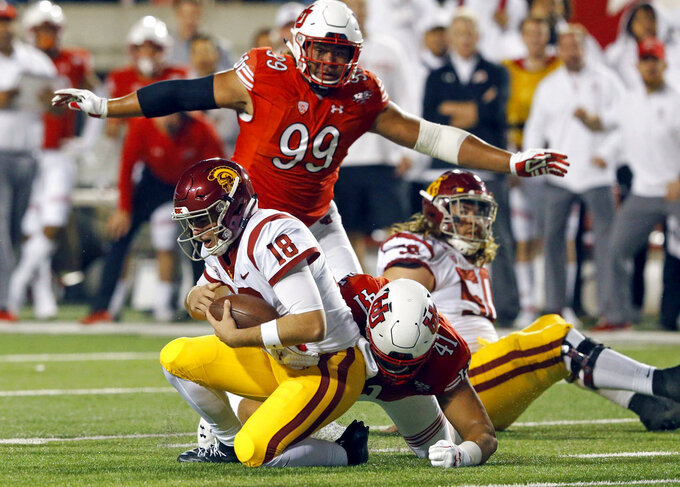 LOS ANGELES (AP) — It is still not clear whether freshman JT Daniels or redshirt freshman Jack Sears will start at quarterback for Southern California against Arizona State on Saturday.

The unknowns on offense have the Trojans defense understanding that the pressure is on them to save the season against the Sun Devils.

Daniels remains in concussion protocol after departing the 41-28 loss at Utah in the second half. USC coach Clay Helton said Daniels, who has thrown for 1,629 yards with eight touchdowns and seven interceptions in seven games, would have to be cleared by Friday to be available this week.

"If we get to Friday and it's not happening, then I'll go ahead and say Jack is going to be the starter," Helton said.

Matt Fink, who had been backing up Daniels, sustained broken ribs against the Utes. Helton said the injury will force Fink to miss three to four weeks.

Sears, who succeeded former USC quarterback Sam Darnold as the starter in high school in San Clemente, California, has not attempted a pass in a college game.

Those questions have Rector and the defense focusing on how they can perform, independent of the offense. That means an extra emphasis on sound tackling and holding on third down, two areas where Rector felt USC could have done better against Utah.

"We can't really control what the offense does, but tackling and getting off the field for us is something that we can work on and control," said Rector, who had 3 1/2 tackles for loss with two sacks against Utah.

However, the defense has shown a propensity for wearing down when it doesn't get consistent support from the offense. USC's defense has been on the field for an average of 73.3 plays in three losses this season and wore down in the second half against Stanford, Texas and Utah.

Against Utah, the USC offense went three-and-out on six of 13 possessions. Two other possessions ended in interceptions on the third and fourth play of those drives.

USC ranks 110th in the FBS in time of possession (27:35), but cornerback Ajene Harris still has trust the offense will do its part to help the defense out regardless of whether Sears or Daniels is the quarterback.

"We just got to do what we got to do and continue to make plays," Harris said. "Just count on them to make their plays and we should be successful."

Safety Marvell Tell III hopes the defense can lift USC by drawing inspiration from Harris, who played against Utah one day after his father died Friday morning.

Harris said he never considered not playing against Utah, not with the Pac-12 South lead at stake.

"I mean, I just knew I couldn't let my teammates down. We still have a goal and we are still fighting for something, and that's something I just had to fight though and help my team as much as possible," said Harris.

Even after the 41-28 loss to the Utes, USC can still reach the Pac-12 championship game by winning all four of its remaining conference games and having Utah lose one of its final four conference games.

Though it might seem like an unlikely outcome knowing USC could be starting an unproven quarterback Saturday, Tell wants the defense to show the same commitment going forward that Harris did against Utah.

"Going through something like that, a lot of guys can't even imagine what that feels like," Tell said. "And just seeing that toughness, that mental toughness, it should inspire everyone on this team, for sure."

NOTES: LB Cameron Smith is not expected to play against Arizona State after having fluid drained from his knee Tuesday. Smith missed the game against Colorado because of a strained hamstring and left in the first quarter against Utah when that injury flared up.