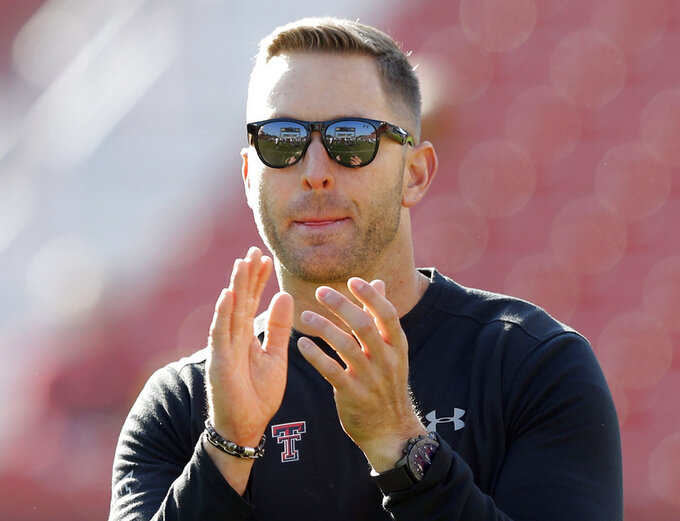 FILE- In this Oct. 27, 2018, file photo, Texas Tech head coach Kliff Kingsbury stands on the field before an NCAA college football game against Iowa State in Ames, Iowa. Kingsbury has agreed to become Clay Helton’s offensive coordinator and quarterbacks coach at Southern California, USC announced Wednesday, Dec. 5, 2018. Kingsbury is considered one of the top offensive minds in football despite being fired by Texas Tech on Nov. 25. (AP Photo/Charlie Neibergall, File)

Kingsbury is considered one of the top offensive minds in football despite being fired by Texas Tech on Nov. 25. He went 35-40 in six seasons in charge of his alma mater, but the Red Raiders consistently had one of the nation's most dynamic offenses.

Kingsbury reportedly was pursued by NFL teams after his dismissal, but he chose to join the embattled Helton at talent-loaded USC, which just completed its first losing season since 2000.

"He is a brilliant offensive mind and is on the cutting edge of the game today," Helton said. "His offenses have consistently been at the top of the college football statistical rankings. With the talent on our team, along with his leadership and coaching, I truly believe that we can take our offense to new heights."

Kingsbury's arrival should placate a large segment of the unsatisfied USC fan base that called for Helton's firing throughout the second half of the season. USC athletic director Lynn Swann realized he was going against public sentiment when last month he elected to retain Helton, who got a contract extension through 2023 earlier this year.

Kingsbury was spotted on USC's campus last week, and the Air Raid architect's interest in the job immediately excited fans who were skeptical that Swann and Helton were committed to change in the sputtering program. The school also is eager to avoid a downturn in football interest next season at the Coliseum, which is undergoing a $315 million renovation.

Few coaches have better reputations for developing exciting offenses and star quarterbacks than Kingsbury, who set several NCAA records as a quarterback under current Washington State coach Mike Leach while at Texas Tech.

After his firing at Tech, Kingsbury drew interest from collegiate and NFL teams seeking his quarterback expertise and offensive vision. He chose to stay in the college game at powerhouse USC, which is coming off just its fourth losing season since 1961.

USC ranked 11th in the Pac-12 last season with 382.6 yards per game. Helton, the Trojans' former offensive coordinator, took over play-calling duties from Martin for the final four games of the just-completed season, but the Trojans finished 83rd in the FBS in total offense, 91st in scoring and 108th in rushing.

Kingsbury has no previous ties to USC, and his hiring represents a break with tradition at a school that had strived for nearly a decade to recapture the glory of its dominant era under Pete Carroll.

The school already had a decades-long history of hiring and promoting from within its vaunted football program, and it unsuccessfully replaced Carroll with two of his former assistants: Lane Kiffin and Steve Sarkisian.

Kingsbury seems certain to create a new-look offense for the Trojans, who won the Rose Bowl and the Pac-12 in Helton's first two full seasons in charge.

Daniels was considered the nation's top quarterback prospect when he arrived at USC, but he showed only flashes of that talent while throwing for 2,672 yards with 14 TD passes and 10 interceptions as a freshman. His 128.6 quarterback rating was 10th in the Pac-12.