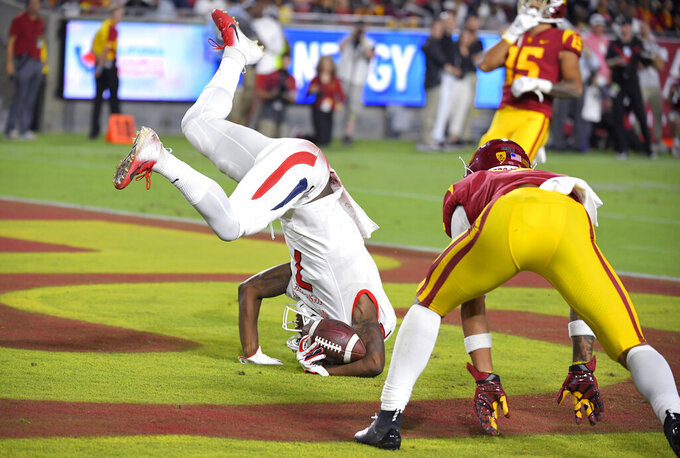 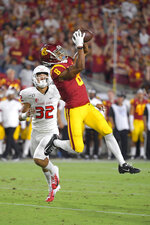 LOS ANGELES (AP) — When J.T. Daniels left the field unable to put weight on his right leg, the quarterback's Southern California teammates understandably fell into a funk that lasted through halftime.

Velus Jones Jr.'s magnificent kickoff return finally roused the Trojans to persevere for a gritty opening win in a season that looks uncertain.

Vavae Malepeai rushed for a career-high 134 yards and Jones returned a kickoff 101 yards for a score in a 31-23 victory over Fresno State on Saturday night.

Daniels passed for 215 yards before getting hurt on a blitz 27 seconds before halftime. The sophomore returned to the sideline on crutches with a brace on his right knee for the second half, and the Trojans say they won't know the extent of his injury before an MRI exam Sunday morning.

Coach Clay Helton called the injury "gut-wrenching, when you see a kid that's poured so much into the game and into this team. ... I hope we get the best results tomorrow and see where it lies."

Freshman backup Kedon Slovis passed for 57 yards in his debut for the Trojans (1-0), who opened a high-pressure season for Helton with a major injury overshadowing strong performances across the rest of the Air Raid-style offense installed by new coordinator Graham Harrell.

Stephen Carr caught a TD pass and rushed for another score, while Malepeai scored a touchdown and grinded out plenty of tough yards in the second half. Tyler Vaughns had 11 catches for a career-high 150 yards for the Trojans, whose point total was hurt by two red-zone turnovers by Daniels before his injury.

"It was just amazing to come out here and show everybody what this offense can do," Carr said. "It was a sad sight to see J.T., but he came up to me on the sideline and said, 'Hey, let's turn it up.' He was still pumping us up."

USC led by 18 points entering the fourth quarter, but needed a strong defensive finish to hang on. Isaiah Pola-Mao made an interception in the end zone with 1:45 to play.

Jorge Reyna passed for 256 yards and ran for 88 more for the defending Mountain West champion Bulldogs (0-1), who had won 21 of their last 25 games under coach Jeff Tedford. The Bulldogs trimmed USC's lead to 17-13 right before Jones' 101-yard return.

"(The) kickoff return was a big play for sure, because we had a little bit of momentum going right there, and we let him get loose," Tedford said. "Again, they made a big play and we didn't execute very well."

Fresno State trimmed its deficit to 31-23 on Chris Coleman's 8-yard TD catch with 6:39 to play. USC then turned the ball over on downs at midfield, but Pola-Mao picked off Reyna's throw to the end zone before Malepeai and the Trojans ran out the clock.

Reyna, a Los Angeles-area native, went 19 for 39 while taking over for Marcus McMaryion, one of eight Bulldogs offensive starters who must be replaced this fall. Reyna ran well, but glaringly missed a handful of key throws.

"He will definitely build off of this, his first start against a very aggressive good team," Tedford said. "We missed some balls, but next time out he'll know what to do with it."

One of Reyna's high school coaches and his coach from West Los Angeles College were in the stands.

"My journey has never been easy — family life, football life, academics," Reyna said. "But I just wanted to show you guys that I can fight, and I'm going to keep on fighting on matter what happens."

Harrell's highly anticipated offense had a fairly sharp start with Daniels, who completed 13 of his 14 passes on the first two drives. USC racked up 308 total yards in the first half, but Daniels threw a goal-line interception in the second quarter before losing a fumble while getting injured.

With big plays on defense and special teams, the Trojans hung on in the second half behind the 18-year-old Slovis, an unheralded recruit from Scottsdale, Arizona, who unexpectedly beat out Jack Sears and Matt Fink for the backup job in camp. Slovis went 6 for 8, but threw an interception that sparked the Bulldogs' comeback hopes.

"You never like to see your teammate go down," Slovis said. "But that's my role. I've just got to be as good as him."

Fresno St: The Bulldogs couldn't pull an upset at the Coliseum despite 206 yards rushing and decent moments of defensive play. It's too early to gauge the quality of this loss, but Reyna's inconsistency in important moments raises flags.

USC: A win feels good, but Helton and Harrell have a huge amount of work to do in the next week. If Daniels is out long-term, they must decide whether Slovis is ready to take charge during the Trojans' brutal early-season stretch of games, or whether they go back to Fink or even Sears, who entered the transfer portal after missing out on the starting job.

Fresno State welcomes Minnesota to Bulldog Stadium next Saturday for the first visit from a Big Ten team since 2014.

USC opens Pac-12 play with a visit from Stanford next Saturday in the California private schools' annual way-too-early meeting.