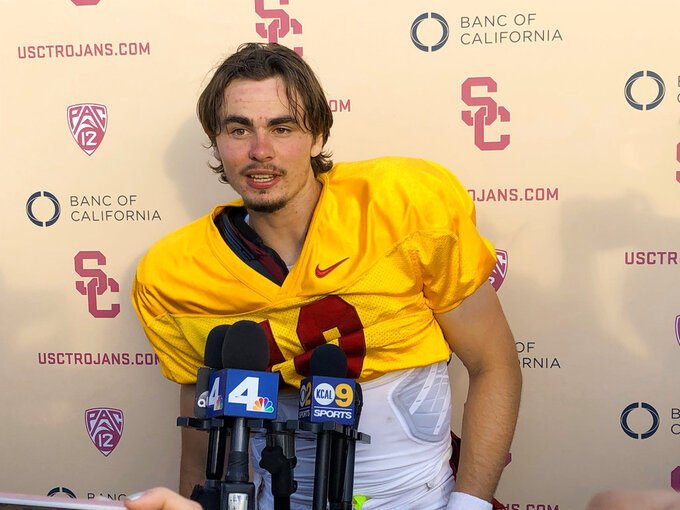 LOS ANGELES (AP) — Freshman quarterback J.T. Daniels is off to a fast start at No. 15 Southern California.
Daniels won the competition to replace Sam Darnold when he should have been starting his senior year at Mater Dei High School in Orange County.
But UNLV is determined to slow Daniels down Saturday when he becomes the Trojans' first true freshman starting quarterback since 2009. Daniels graduated from high school a full year early last spring to enter the competition for the Trojans' starting job.
"Great player, that's why he's at USC, one of the top recruited guys in the country, but he is a freshman and it is college football so the game is going to be a little faster," Rebels coach Tony Sanchez said.
USC quarterbacks coach Bryan Ellis expects UNLV to use a variety of looks and pressures to try to confuse and hit the 2017 Gatorade national player of the year, but executing the plan to counteract the Rebels defense could depend on the availability of center Toa Lobendahn.
Lobendahn is questionable after missing all three days of practice this week because of a strained pectoral muscle. Redshirt freshman Brett Neilon would start in his first collegiate action if the senior cannot play, with freshman Justin Dedich as the backup.
"Well, I'll go take my Pepto-Bismol now," USC coach Clay Helton joked when asked about the possibility of having such an inexperienced duo handling the ball on every play. Helton said he would be comfortable starting Lobendahn without him having practiced because of his 34 career starts.
No matter who starts at center, Daniels' safety blanket could be freshman wide receiver Amon-Ra St. Brown. Daniels and St. Brown played together in high school, and the younger brother of former Notre Dame wide receiver Equanimeous St. Brown and Stanford sophomore wide receiver Osiris St. Brown caught many of the big passes during training camp that helped Daniels get the starting job.
Here are some other things to know at USC looks to improve to 17-0 at home under Helton:
MEASURING STICK: Given his strong arm and willingness to throw down the field, especially to St. Brown, Daniels could easily surpass the modest statistics Matt Barkley put up in his USC debut in 2009. Barkley was 15 of 19 for 233 yards in a 56-3 win over San Jose State, with the first of his 116 career touchdown passes coming on a 4-yard throw to tight end Rhett Ellison in the third quarter.
ONE-TWO PUNCH: Led by inside linebacker Cameron Smith and outside linebacker Porter Gustin, who is expected to start after undergoing surgery to repair a torn meniscus in his knee on Aug. 8, USC expects to field its most talented and deepest defense yet under third-year coordinator Clancy Pendergast. However, the Trojans will be tested by Rebels quarterback Armani Rogers and running back Lexington Thomas. Thomas rushed for 1,336 yards last season, and Rogers had 780 yards and eight touchdowns on the ground as a freshman.
ROAD WARRIORS: All four of UNLV's wins over teams ranked in the AP Top 25 have come on the road, including a 23-20 overtime win at No. 15 Arizona State in 2008. That was the Rebels' last victory against a Pac-12 foe, and they are 4-15 all-time against teams from the league.
NEXT MAN UP: While the focus has been on replacing Darnold, USC also lost 1,550-yard rusher Ronald Jones II to the NFL early. Sophomore Stephen Carr, senior Aca'Cedric Ware and sophomore Vavae Malepeai will all get carries as the Trojans look for more of a committee backfield. Carr ran for 298 yards and three touchdowns in his first four games, including a 119-yard game eruption on 11 carries against Stanford, before sustaining a sprained ankle that limited him for the rest of his freshman season. Carr also underwent back surgery during the offseason, but has looked like his explosive self again during the latter stages of training camp.
INTERSECTIONS: Rogers is the most prominent of the 42 players from California at UNLV. He attended Hamilton High School, which is less than seven miles away from the LA Coliseum.
USC has three players from Las Vegas on the roster, including sophomore safety Bubba Bolden, who played under Sanchez for one season at Bishop Gorman High School. Bolden was expected to make his first career start against his hometown team. However, Helton announced Thursday that Bolden will not be available to play against UNLV and has no timetable for his return.
___
More AP college football: https://apnews.com/tag/Collegefootball and https://twitter.com/AP_Top25