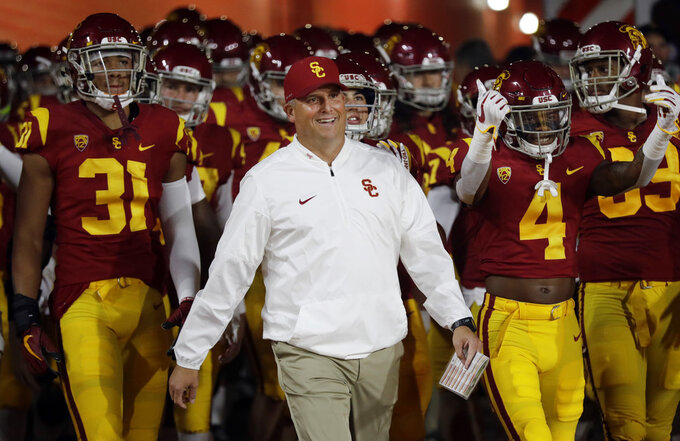 FILE - In this Oct. 13, 2018, file photo, Southern California head coach Clay Helton smiles as he enters the field with his team during an NCAA college football game against Colorado in Los Angeles. Saturday's game between USC and Oregon State will feature two contrasting teams. The Trojans are coming off a disheartening loss at home, while the Beavers had a statement-making win on the road. USC coach Clay Helton will try to get the Trojans back on track by taking over the play calling. (AP Photo/Marcio Jose Sanchez, File)

The USC Trojans are reeling after a confidence-busting loss at home while the Oregon State Beavers are reveling in their first conference win since 2016.

The Trojans (4-4, 3-3 Pac-12) fell at the Coliseum 38-35 to Arizona State last weekend, snapping a 19-game winning streak at the venerable stadium. It marked the first time since 2001 that USC has a record of .500 or worse heading into November.

"I just thought it was the appropriate time," Helton said. "I've had the itch to get back, more integrated with the offense. Being in year three of being the head coach and feeling more comfortable with the role and the job of head coach, the duties that come with it, I know the lay of the land now."

While the Trojans made adjustments, the Beavers (2-6, 1-4) were still celebrating their 41-34 overtime victory at Colorado last weekend. It was the team's first conference win since 2016 and snapped a 22-game road losing streak dating to 2014.

"There was a lot of excitement, the kids were fired up. Obviously a lot of hugs with those guys, especially the senior class. They have been through so much. So there is some energy and just pure joy," first-year coach Jonathan Smith said afterward.

Well, celebrating to a point. Oregon State still went into halftime with a 24-3 deficit and surrendered an early second-half touchdown.

Other things to know about the USC-Oregon State matchup:

USC's QB: Helton said freshman quarterback JT Daniels had cleared concussion protocol but wasn't going to see contact this week in practice. He added that he expected Daniels would be ready to go against the Beavers. Daniels suffered the concussion two weeks ago against Utah. Redshirt freshman Jack Sears started against the Sun Devils and threw for 235 yards and two touchdowns.

OREGON STATE'S QB: Oregon State started sophomore Jack Colletto against Colorado while Conor Blount recovered from a concussion. However, Jake Luton, who had been out with a high ankle sprain since Sept. 15, was inserted early in the second half and wound up throwing for 310 yards and three touchdowns. He was named the Pac-12 Offensive Player of the Week.

Smith said this week that Blount had still not been cleared to play, so Luton will get the start against USC.

SUPPORTING TEE: Receiver Michael Pittman Jr. had nothing but praise for how Martin was handling the situation.

"I'm just like the player, so I just play in a system. I just get the plays and I just run them. It's not a big switch up to me, but one thing I did notice is I feel like Coach Tee came out here with a really positive attitude. He's coaching real hard. He's just keeping his spirits up, and I really feel that he's putting all of his heart into us as wideouts now and I can feel his energy more. He's not having a pity party," said Pittman, who leads the team with 27 catches for 561 yards and six touchdowns.