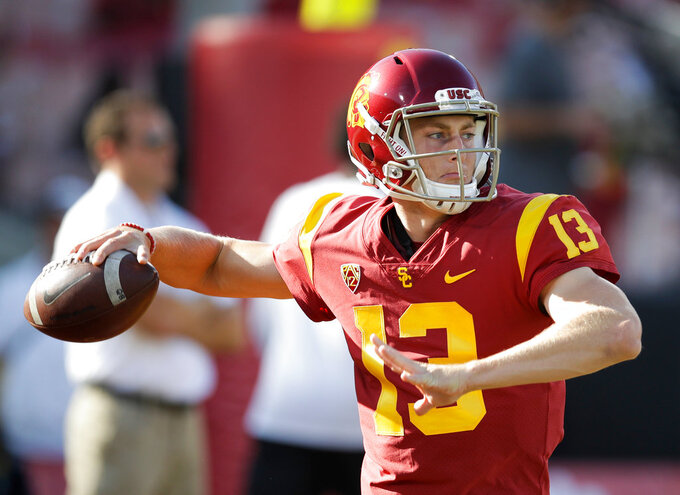 LOS ANGELES (AP) — The recent history between Arizona State and Southern California has been light on competitive games, with only one of the past seven games decided by fewer than 21 points.

That could change when the Sun Devils and Trojans meet Saturday as new Arizona State coach Herm Edwards has shown a preference for one-possession games.

"I think they are doing a great job defensively of holding the points down," USC coach Clay Helton said. "That's keeping their offense in the games and keeping them close games."

Arizona State (3-4, 1-3 Pac-12) has played five games decided by seven points or fewer, with each of their three conference losses coming by seven points. It is a string of results that has Helton warning his team and USC fans not to overlook Arizona State based on their record.

Edwards said the close defeats are weighing on a young team, but expects those results to turn into wins soon enough.

"They know that it was right there in front of us," Edwards said of the 20-13 loss to Stanford last week. "They watched the tape. They get it. I like their resolve because they continue to fight and they understand we are that close. We just have to continue to be playing that way and eventually, we will get one to go our way again and we will feel a lot better. I will not be sitting in here saying that we lost by seven again."

But with redshirt freshman quarterback Jack Sears making his first career start, a game that goes down to the wire might not be in the best interests of injury-riddled USC. Helton confirmed Friday that the third-string quarterback will make his collegiate debut against the Sun Devils.

Freshman starter JT Daniels didn't clear concussion protocol by Thursday after leaving the 41-28 loss at Utah in the second half. Backup Matt Fink also broke three ribs while playing in relief of Daniels and will miss three to four weeks.

Here are some other things to watch for when Arizona State and USC meet for the 35th time:

SEARS OUTLET: Originally committed to Duke before signing with USC, Sears threw 74 touchdown passes against eight interceptions in two seasons as the starter in high school in San Clemente, California, after succeeding former USC star Sam Darnold. The 6-foot-3, 205-pound Sears might have the skillset to shake up a stagnant Trojans offense as he is more mobile than Daniels and a better passer than the athletic Fink, but USC could be cautious about letting Sears run as the next quarterbacks on the depth chart would be walk-ons Holden Thomas and Brandon Perdue.

WILY WATKINS: At the other end of the experience spectrum is Arizona State redshirt senior quarterback Manny Wilkins, who is set to make his 31st career start. While Wilkins is ranked among Arizona State's top 10 career passers in multiple categories, Edwards recognizes he needs help to get the team back in the win column. "Can our defense give him a short field to have momentum instead of starting from a deficit? Also, when our offense scores a touchdown, our defense has to not allow the other team to drive right back down the field for a touchdown. We have to build some momentum for him and he cannot do it by himself," Edwards said.

AT HOME AT HOME: USC has won 19 straight games at the Coliseum, never losing at home since Helton became interim coach midway through 2015. "We don't really talk about the winning streak, but it's on our mind every time we step in the Coliseum," cornerback Ajene Harris said. "We know we have to defend it. We know we're undefeated there and we want to stay undefeated there."

NEW ARRIVALS: Arizona State is getting plenty of contributions from its freshmen on defense. Safety Jalen Harvey, linebackers Merlin Robertson and Darien Butler are the Sun Devils' top three tacklers and have combined for 14 1/2 tackles for loss, helping Arizona State lead the Pac-12 in negative plays per game (8.29).

RECTOR THE REPLACEMENT: When outside linebacker Porter Gustin sustained a season-ending broken ankle against Colorado, there were real questions about how USC would make up for the loss of the ferocious edge rusher. It turns out redshirt junior Christian Rector was up to the task for the second straight season. After posting 11 tackles for loss with 7 1/2 sacks in place of Gustin last season, Rector made 3 1/2 tackles for loss with two sacks against Utah and will look to add to those totals against Arizona State right tackle Quinn Bailey, who has not allowed a sack this season.

By John Zenor 20 minutes ago
By Pete Iacobelli 2 hrs ago
3 hrs ago
By Ralph D. Russo 6 hrs ago
By Ken Powtak 19 hrs ago