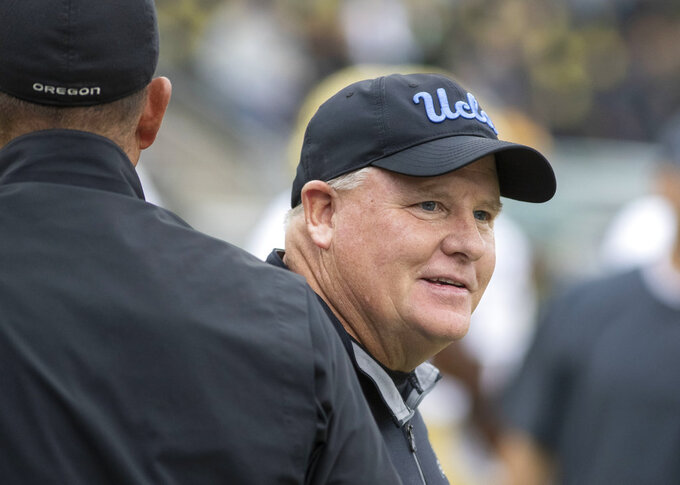 PASADENA, Calif. (AP) — The annual crosstown showdown has arrived at a particularly low point in the football history of both Southern California and UCLA.

The schools' 13 combined losses are the most they've ever had in 88 editions of the game for the Victory Bell. Both the Trojans (5-5, 4-4 Pac-12) and the Bruins (2-8, 2-5) are out of the conference title race and playing for little more than local pride.

That's still more than enough to motivate the players on both sides of Los Angeles' ever-roiling rivalry.

While the result doesn't mean much outside the LA metroplex, the stakes remain high inside the Rose Bowl on Saturday. The game is also the first in the rivalry for two major figures going forward: USC quarterback J.T. Daniels and UCLA coach Chip Kelly.

"A lot of our guys know their guys," Kelly said. "A lot of guys played high school football together, and then one went here and one went there. That's part of the uniqueness of the rivalry with the proximity of both schools. There's a real familiarity with this team more than any other we play."

A win would be the 50th in rivalry history for the Trojans, who have won the last three straight meetings. Clay Helton has never lost to the Bruins as a head coach, and keeping that streak alive would make the Trojans bowl-eligible while removing a modicum of the pressure currently weighing on him.

"Los Angeles is home to both of us, and I've thought this is such a cool rivalry because we all live together," Helton said. "Los Angeles is the best city in the world, and we've got two great universities that love to compete against each other."

Here are more things to know about the rivalry that began in 1929 with a 76-0 win for the Trojans:

USC has lost three of its last four to fall out of contention in the Pac-12 South. The Trojans need one win to gain bowl eligibility, and they would be wise to get it this week with No. 3 Notre Dame traveling to the Coliseum next Saturday for the regular-season finale. USC's struggles have put heat on Helton's job security, particularly given Daniels' inconsistent play for the longtime quarterbacks coach in a struggling offense that managed only 14 points last week in a home loss to California.

The Bruins have lost three straight after back-to-back victories, and they'll finish with a losing record for the third consecutive year. But Kelly is seeing signs of progress from his first year in charge, and UCLA would love to justify its high-priced coach's work with a rivalry win. Kelly doesn't see USC's three-game winning streak in the series as a major factor, either: "At one point Milli Vanilli was on top of the world, and then it all crashed and burned," he said.

Kelly hasn't settled on a quarterback all season, playing both veteran Wilton Speight and youngster Dorian Thompson-Robinson to similarly modest success. Kelly doesn't see the point in relying on just one passer, and their divergent skill sets allow Kelly to mix up his offensive plans. USC's defense has been solid nearly all season long, and it will be ready. "We're scheming for both quarterbacks," Trojans defensive lineman Jay Tufele said. "But whoever is in there, we're going to have the same game speed. We're going to play like our hair is on fire no matter which quarterback is in there. We're going to get to him and make sure he doesn't make plays."

Because both teams recruit extensively from their own backyards, just about everybody knows everybody on the opposite sideline in the crosstown showdown. For instance, USC freshmen Daniels and receiver Amon-Ra St. Brown both played high school football in Orange County with UCLA sophomore safety Quentin Lake, who has become the Bruins' third-leading tackler. "I kind of know his releases, tendencies and what he does at the top of routes," Lake said of St. Brown. "I feel like I might have a little bit of an edge, but he has gone against me a couple hundred times in practice, too."

Both teams are having poor seasons, but the city rivalry doesn't take a year off: The Bruin Bear, a statue on UCLA's campus, was covered in red and yellow spray paint Thursday. The schools toned down the rivalry in other areas, however: Both schools decided to forgo their traditional pregame bonfires out of respect for the victims and firefighters involved with the wildfires raging throughout Southern California this month.