Notre Dame quarterback Ian Book (12) works in the pocket against Georgia during the first half of an NCAA college football game, Saturday, Sept. 21, 2019, in Athens, Ga. (AP Photo/John Bazemore) 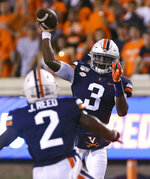 Notre Dame tries to bounce back from a painful loss and Southern California tries to build on the momentum of a surprising win in the two most notable college football matchups this week.

The 21st-ranked Trojans visit No. 17 Washington on Saturday, while the 10th-ranked Fighting Irish host No. 18 Virginia. Those are the week's only two matchups pitting ranked foes against each other.

USC is coming off a victory over Utah that dropped the Utes from 10th to 19th. Notre Dame suffered its first loss of the season last week when it fell 23-17 at No. 3 Georgia.

Here are some things that merit watching in college football this week.

No. 21 Southern California at No. 17 Washington

USC is in the midst of a huge three-game stretch that could define its season. The Trojans visit Washington and Notre Dame in their next two games. Win both and the Trojans become a potential playoff contender. Lose both and the calls for coach Clay Helton's removal grow even louder. USC quarterback Matt Fink replaced an injured Kedon Slovis against Utah and is likely to start Saturday with Slovis in concussion protocol.

Wisconsin running back Jonathan Taylor led all Football Bowl Subdivision players in rushing last year and ranks third this season with 146.7 yards per game. His 203-yard performance in the eighth-ranked Badgers' 35-14 victory over No. 20 Michigan marked the ninth time he's reached the 200-yard mark in 30 career games.

Taylor next faces Northwestern, one of the few teams to hold him in check. In two games against the Wildcats, Taylor has yet to have a 100-yard game, totaling 126 yards and averaging 4.2 yards per carry.

900 - Nebraska earned its 900th win in school history Saturday by beating Illinois 42-38. The Cornhuskers now face No. 5 Ohio State, which has 915 wins. No. 6 Oklahoma and Notre Dame look to become the sixth and seventh FBS programs to collect 900 wins as measured by the NCAA when the Sooners host Texas Tech and the Irish host Virginia on Saturday. Other FBS schools with at least 900 wins include Michigan, Texas and Alabama. Notre Dame actually has won 920 games but had to vacate 21 of those victories from 2012 and 2013.

Wake Forest (4-0, 0-0 ACC) at Boston College (3-1, 1-0): Wake Forest's fast start has garnered so little attention that the unbeaten Demon Deacons remain unranked, though they are 24th in the coaches' poll. The Deacons seek their first 5-0 start since 2006 when they visit Boston College, which won 41-34 at Wake Forest last season.