USC WR Amon-Ra St. Brown is ahead of the curve as a freshman 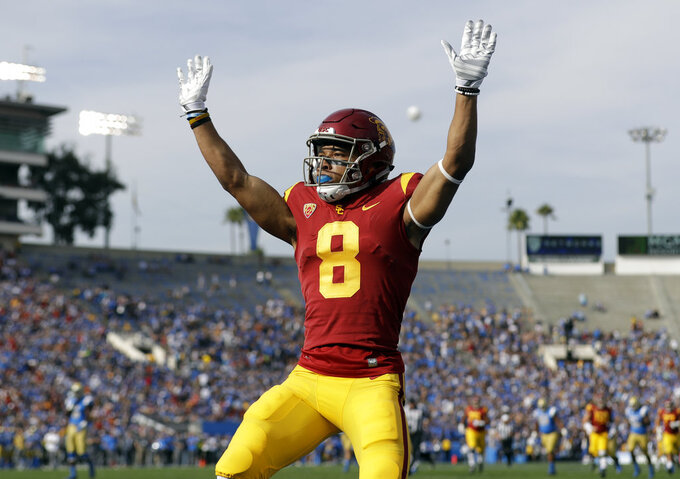 St. Brown would stay at one spot in his first season, the same approach Martin used successfully with former Trojan stars Nelson Agholor and JuJu Smith-Schuster as freshmen.

Martin never expected St. Brown to be so advanced that he would capable of playing in the slot or outside, let alone emerge as a main option in the passing game for USC with 50 receptions for 656 yards, both team highs.

"It's not normal for a young guy to be able to do that," Martin said. "Really haven't seen it."

It was clear from the start that St. Brown would not need to be brought along slowly into college football. He caught a 44-yard touchdown pass on the first play of the fourth quarter in the season opener against UNLV, helping USC to pull away with the win by making seven receptions for 98 yards. It helped that St. Brown had played with freshman quarterback JT Daniels at Mater Dei High School in Santa Ana, California, and the rapport they had built in practices and games gave them a comfort level as they adjusted to a new level of competition.

St. Brown was rotating with starters Tyler Vaughns and Michael Pittman Jr. early on, with his work in the slot limited to third downs. Martin quickly realized that St. Brown was capable of handling much more than he expected, and St. Brown's usage has continued to grow.

"I expect things for myself, but to tell you that I would be expecting this, I'd be lying if I said yes," said St. Brown, who has three touchdown receptions. "I worked hard. Worked with Tee, coaches, our teammates, my line, my quarterback. They are doing a great job. A whole team effort I think."

Martin remains impressed that St. Brown has been able to execute multiple roles with only player-run summer workouts, training camp and three months of game preparation to understand the offense.

"Amon-Ra is the first one to grasp it all during the course of a season not being a mid-year (enrollee), not having a spring under his belt and just throughout the course of the year learning, which is very rare and unique," Martin said. "I give him credit for that."

There can be no doubting St. Brown's ability to absorb information. Fluent in French and German, he showed off his foreign language skills in a radio interview with a reporter after practice.

However, it was getting the chance to put what he had learned into action on the field that allowed St. Brown to truly process his different roles.

"Going in, whether it's with the ones or twos, to just get physical reps is what helps it stick to your brain," St. Brown said. "I mean you can read papers all day, but until you go out there and actually do it, it's something different."

Going into what could be the final game of his freshman season, with USC (5-6) needing to defeat No. 3 Notre Dame to become bowl-eligible, St. Brown is looking forward to showing off his improvement in a rivalry he is quite familiar with. St. Brown's oldest brother, Equanimeous, played three seasons for the Fighting Irish and led the team in receptions and yards receiving in 2016-17.

The third St. Brown brother, Osiris, is a redshirt freshman at Stanford.

Equanimeous St. Brown had 10 receptions for 123 yards and two touchdowns in three games against USC, and Amon-Ra St. Brown is looking forward to making his mark in the famed intersectional rivalry.

"But no real trash talk as of right now," St. Brown said. "I'm sure he's going to be watching the game. I'm excited, he's excited. It's going to be a good game."

"To add to the rivalry that already exists, I know that's something special between those two," Martin said.

Even if St. Brown cannot help USC upset Notre Dame and earn one more game to show off his skills this season, Martin has seen enough to believe St. Brown can be the next great receiver for the Trojans.

"He has everything," Martin said. "It's really rare that a guy can do what he's been able to do as a true freshman."