USC WR Drake London out for season with broken ankle 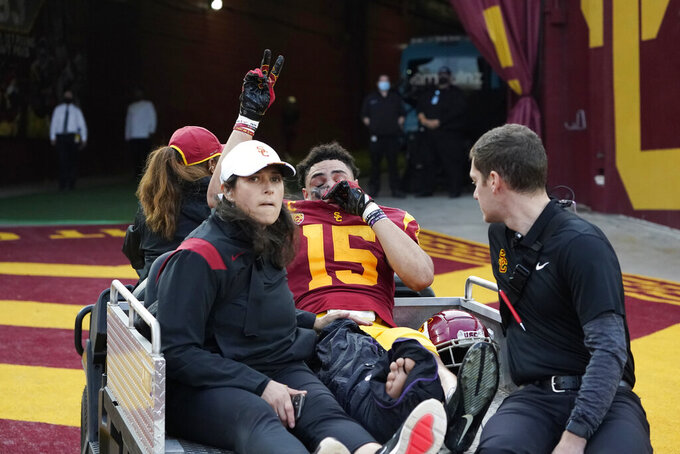 Southern California wide receiver Drake London waves to fans as he is carted off following an injury in the end zone after scoring a touchdown during the first half of an NCAA college football game against Arizona, Saturday, Oct. 30, 2021, in Los Angeles. (AP Photo/Marcio Jose Sanchez)

LOS ANGELES (AP) — Southern California receiver Drake London will miss the rest of the season with a broken right ankle, likely ending the collegiate career of one of the nation's top wideouts this season.

London was hurt when he was tackled by Arizona cornerback Christian Roland-Wallace as he crossed the goal line late in the first half to score in the Trojans' victory over Arizona on Saturday night. He had with nine catches for 81 yards and two TDs before he was taken off the Coliseum field on a cart, and he returned to the USC sideline to watch the second half with a cast on his leg.

London had 88 catches for 1,084 yards and seven touchdowns in just 7 1/2 games this season. He was well on pace to set USC's single-season records for receptions and yards receiving before the injury.

The former two-sport athlete gave up basketball this year to concentrate on his football career. He is expected to be among the top receiver prospects in the upcoming NFL draft if he leaves USC early as expected.

“He was about to put up one of the best statistical seasons any receiver has ever put up in college football, and that’s saying a lot,” USC interim coach Donte Williams said. "We’re going to miss him as a player, but the things that people forget about is who he is as a person to this team. He’s a team captain for a reason.”