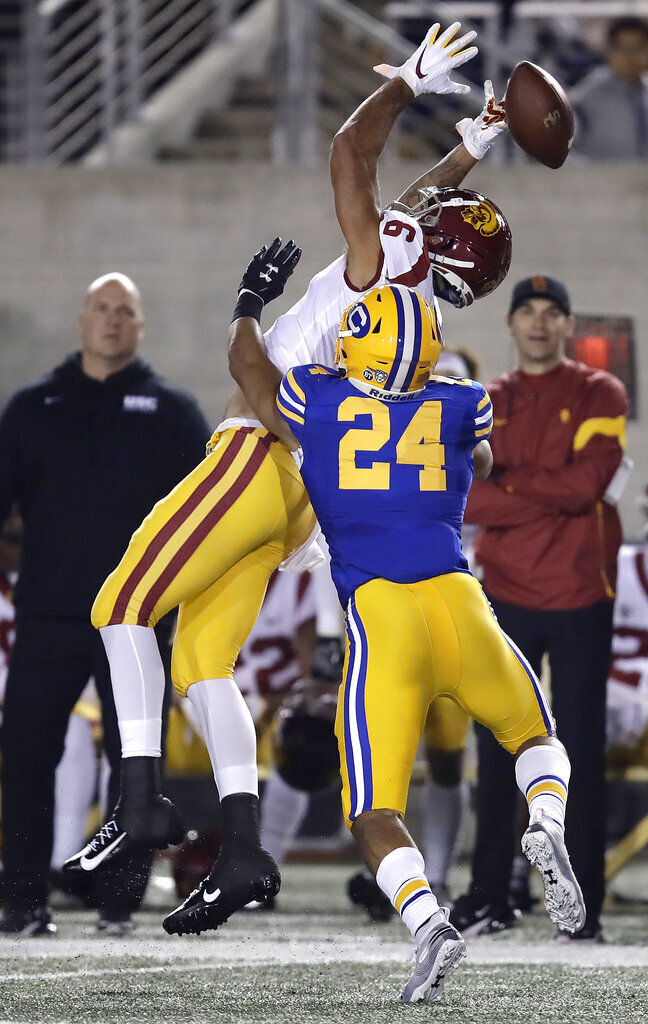 LOS ANGELES (AP) — Michael Pittman Jr. wants to be perfect, and the Southern California wide receiver has come close in his senior season.

Pittman has 82 receptions for 1,118 yards, ranking third in the FBS in both categories, and is a semifinalist for the Biletnikoff Award presented to the nation’s top receiver.

His most impressive feat might be that Pittman has dropped one pass this year going into the Trojans’ regular season finale against UCLA on Saturday, all the more fitting as his pursuit of excellence started with a drop against the Bruins as a freshman.

A play in the fourth quarter of a blowout rivalry win by USC in 2016 proved to be the beginning of Pittman’s “obsession,” as he described it, with catching the football.

Lined up in the slot on third down, Pittman ran an out route and had positioning in front of two UCLA defenders for what should have been an easy 7-yard touchdown pass from quarterback Sam Darnold. The ball hit Pittman right in the hands, only to fall to the grass.

A sheepish Pittman put both hands on his facemask before beginning the long jog back to the sideline, knowing he had fumbled away what should have been his first collegiate touchdown, with the field goal team coming on to get the final three points in a 36-14 victory.

“And even though we won, that just crushed me, and I was just absolutely crushed,” Pittman said. “Like after that game I just said that I never wanted to feel that again, so my obsession with catching passes like over the summer, during the week, just getting extra catches, that’s when it started.”

Three years later, it seems unfathomable that Pittman, now a sure-handed veteran, could have ever messed up such a simple play.

Go back to his signature performance of the season, when Pittman had 10 receptions for 232 yards and a touchdown against No. 7 Utah, and it serves as a testament to how far he has come. He accounted for more yards in the passing game on his own than the Utes are allowing in Pac-12 play (201.3)

Pittman had four receptions covering at least 25 yards in the 30-23 win, and his 77-yard touchdown catch showed off his best attributes. Pittman made a leaping catch to collect a ball from third-string quarterback Matt Fink at its highest point before breaking away from cornerback Tareke Lewis to cover the final 31 yards.

The ability to make those contested catches has been especially valuable as USC had to turn to freshman Kedon Slovis and Fink after starter J.T. Daniels suffered a season-ending knee injury in the opener against Fresno State. Pittman said he never questions if he will come down with those 50-50 balls, and that mindset provided the inexperienced quarterbacks with a safety blanket.

“I mean, I don’t doubt it because I’m not even thinking about doubt,” Pittman said. “Honestly, I just try to focus on the football the whole way down. It’s weird. Like I don’t think about my feet. I don’t think about the defender. All it is is me and that ball, and then I try to watch it all the way down.”

The 6-foot-4, 220-pound Pittman has provided a template for promising freshman Drake London to follow.

London, who has a similar lanky build at 6-foot-5 and 205 pounds, has come on strong in recent weeks and credits Pittman for helping him get up to speed.

London credits Pittman for reinforcing the need for a relentless work ethic, and their similar styles of play have also shown London how to approach the college game.

“And seeing him, how he goes up there and catches it so effortlessly, I think I can really take after that,” London said.

USC has a strong history of success in recent decades with big receivers that could attack the ball, from Keyshawn Johnson to Mike Williams to Dwayne Jarrett.

First-year wide receivers coach Keary Colbert, who starred alongside Williams on the Trojans’ 2003 national championship team, has no qualms about putting Pittman in that distinguished company.

Pittman appreciates the recognition, even if he won’t go as far as putting himself in that group.

“I just want to come out and make all of our past wideouts proud and all of the future ones that we don’t even have yet, so I’m just trying to carry on that legacy and be great like they were,” Pittman said.