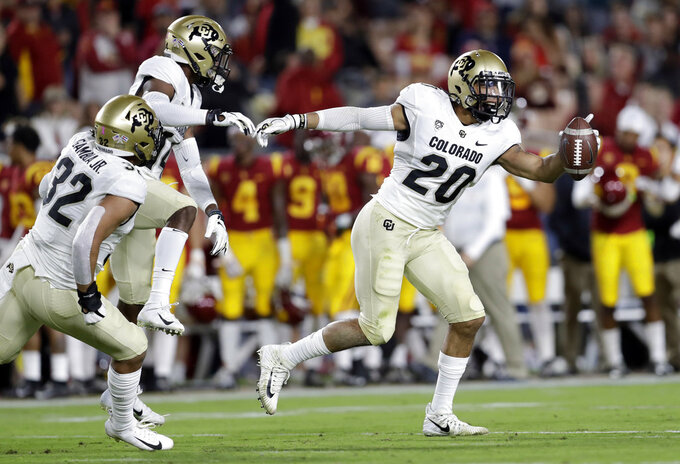 LOS ANGELES (AP) — Until Southern California's young offense can put together an entire game with as many brilliant plays as it crammed into the second quarter against Colorado, the Trojans' defense will attempt to carry them toward the Pac-12 title.

The defense came through with an awfully impressive lift Saturday night.

Ajene Harris returned an interception for a touchdown in the third quarter for the Trojans (4-2, 3-1 Pac-12), who have rebounded from back-to-back losses with three straight wins. The defending conference champions asserted their supremacy over the upstart Buffaloes (5-1, 2-1) in the South division race while remaining unbeaten at the Coliseum in all 19 games under coach Clay Helton.

"It was a win that allows us to control our destiny the rest of the way," Helton said.

None of it mattered while the Trojans' defense limited Colorado's high-powered offense to 265 yards — and a mere 164 in the first three quarters while USC took control with a 28-7 lead.

"I was very proud of them," Helton said of coordinator Clancy Pendergast's defense. "It just felt like we were playing in their backfield the entire night, whether it was the running game or the passing game."

Star receiver Laviska Shenault made a 49-yard TD run before injuring his toe in the second half for the Buffaloes, who dropped to 0-13 in school history against USC.

"They knew what we were going to do," said Colorado quarterback Steven Montez, who went 25 of 46 for 168 yards. "They kind of had us figured out, and when we had some good calls going, we would shoot ourselves in the foot with a bunch of different penalties. I think we've just got to clean it up. If we clean it up, it's definitely a lot closer of a game and I think we give ourselves a chance."

"We won the turnover battle. We won the penalty battle," Colorado coach Mike MacIntyre said. "You should have a chance to win the game. We kind of had a chance there. We just shot ourselves in the foot. Wasn't very pretty there for a while, but they just kept fighting."

USC hasn't lost at the Coliseum since Helton got the job midway through the 2015 season, and the Trojans dominated this late-night showcase with defense — and even without injured linebacker Cameron Smith, their leading tackler this season and in each of the past two years.

Colorado's defense picked off Daniels on the game's first play and again later in the opening minutes, but the USC defense forced immediate three-and-out punts after both turnovers.

"(Daniels) started off slow, but he turned it around and made plays," USC safety Marvell Tell said. "There are some things we've got to correct, but he's a young quarterback, and he's going to grow."

The Buffs' offense had just 30 total yards before Shenault took a direct snap 49 yards untouched for the game's first points early in the second quarter.

USC had zero yards rushing in the first half, but responded to the Buffs' TD with its first scoring drive. Vaughns made back-to-back long catches, including a 27-yard TD grab.

Pittman scored 3:33 before halftime when he came back to get an underthrown pass and eluded the only defensive back near him for a 65-yard TD.

Pittman then capped a four-play drive with a 9-yard TD catch 1:10 before halftime.

Harris put the Trojans up 28-7 when Shenault bobbled a pass right into his arms, and the USC defensive back took it 6 yards for the school record-tying third TD interception return of his career.

Colorado: The Buffs missed out on their first 6-0 start since 1994, and the loss exposed several weaknesses on both sides of the ball, from a punchless running game to dismal downfield coverage on long passes.

USC: After taking their lumps on the road in September, the Trojans appear to be improving on both sides of the ball. Their inability to run the ball is alarming, but just about everything else is showing progress — particularly Pendergast's unit.

Colorado: There wasn't much for voters to like about this performance. The Buffs' stay in the AP Top 25 could be over.

USC: After several weeks without garnering a single vote in the poll, the Trojans should attract some attention heading into their road showdown with Utah, the other top contender for the Pac-12 South crown.

Colorado: At Washington on Oct. 20.