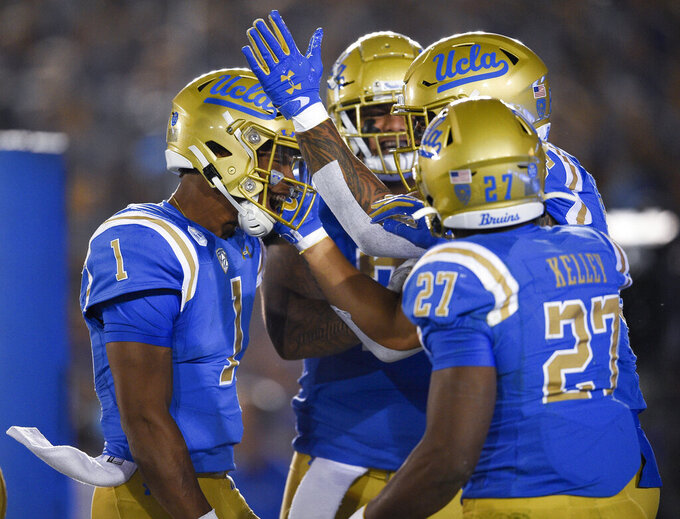 The eighth-ranked Utes, who are seventh in the CFP rankings, have run off five straight victories and are a game ahead of UCLA and USC atop the Pac-12 South. Utah gets a chance to solidify its position when it hosts the Bruins on Saturday.

The Utes (8-1, 5-1 Pac-12) have leaned almost exclusively on an elite defense and dominant running game as a formula for success in the past. This season, Utah has added an efficient passing attack to the mix.

It all starts with senior quarterback Tyler Huntley and his ability to pick apart a defense.

Huntley is getting consistent production from Thompson and his other receivers. Nine different Utah players have caught 10 or more passes this season. Huntley has thrown for at least 200 yards in seven games. He had 11 total 200-yard games over his first three seasons.

“They're doing a good job of knowing their plays and knowing what they're doing,” Huntley said. “When you know what you're doing, you play confident.”

The Bruins are making strides of their own on offense. UCLA (4-5, 4-2) has reeled off three straight wins behind a resurgent running game.

Joshua Kelley has rushed for at least 100 yards in four of his last five games. Kelley, who has 861 total rushing yards this season, leads the league with 107.6 rushing yards per game.

Bruins quarterback Dorian Thompson-Robinson credits the uptick in production to coach Chip Kelly simplifying the offense and identifying his players' strengths as the season has progressed.

“Now he knows what he has on offense, the type of playmakers he has and what they do well,” Thompson-Robinson said. “That was really the big part, knowing what your guys do well. Now he's finally found that and is putting us in the best position to win now."

UCLA is averaging a league-best 37 points per game in Pac-12 play after averaging just 14.0 points in nonconference losses to Cincinnati, San Diego State, and Oklahoma.

LEADER OF THE PAC

Utes coach Kyle Whittingham traces this domination across the board back to his team's ability to control the line of scrimmage.

“We pride ourselves on being physical and it starts with the run game and defending the run,” Whittingham said. “That doesn't change year in and year out.”

A key special teams battle could influence who is able to gain an early edge.

Utah’s Zack Moss isn't just making an impact with his running prowess. Moss is also emerging as a reliable receiver. The senior has totaled 208 of his 215 receiving yards over Utah's last three games. He led the Utes in receiving with a season-high 89 yards on three catches in the team's 35-0 win over California.

UCLA's ability to control the ball has been improving. The Bruins have run an average of 81 plays over their last five games compared to 63.2 plays per game for their opponents.

By Brian Mahoney 3 hrs ago
By Gary B. Graves 6 hrs ago
By Dave Campbell 8 hrs ago
10 hrs ago
By Raul Flores 11 hrs ago