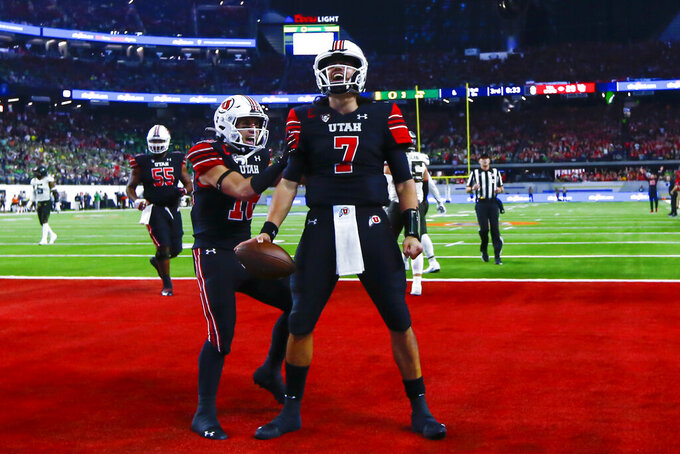 Utah quarterback Cameron Rising (7) celebrates next to wide receiver Britain Covey after scoring on a 2-point conversion against Oregon during the second half of the Pac-12 Conference championship NCAA college football game Friday, Dec. 3, 2021, in Las Vegas. (AP Photo/Chase Stevens)

Ohio State: QB C.J. Stroud (3,862 yards passing, 38 touchdowns) is the first player in Big Ten history to be named the conference's offensive player of the year, freshman of the year and quarterback of the year in the same season.

Utah: RB Tavion Thomas (1,041 yards rushing) is tied for the Football Bowl Subdivision lead with 20 touchdowns on the ground.

Utah: The Utes began the season 1-2 but have won nine of their last 10, including the Pac-12 championship for the first time. LB Devin Lloyd is the only Power Five player with at least 14.5 tackles for loss (22) and multiple interceptions (four).