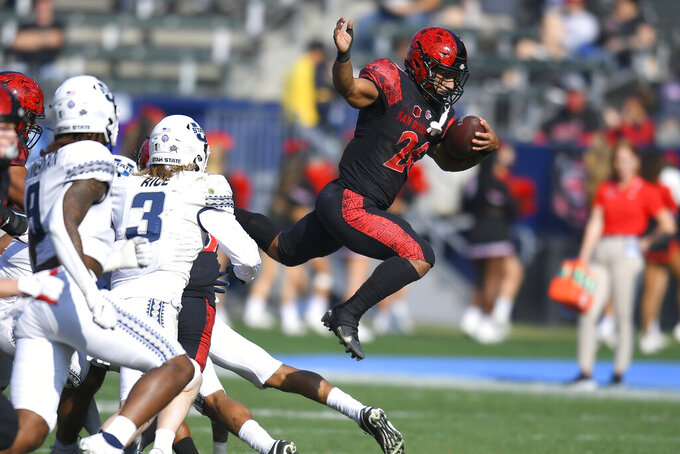 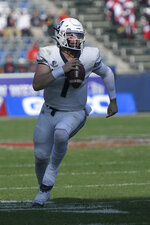 CARSON, Calif. (AP) — Less than a year after coach Blake Anderson and several players uprooted their lives and moved across the country to team up at Utah State, they triumphantly raised their new school's first Mountain West Conference trophy.

Whether they're from Arkansas, Texas, northern Utah or points between, these Aggies are all champions.

Brandon Bowling caught two touchdown passes from Logan Bonner during the decisive third quarter, and Utah State won the league title with a 46-13 rout of No. 19 San Diego State on Saturday.

Bonner passed for 318 yards and four TDs, while fellow Arkansas State transfer Bowling had eight catches for a career-high 154 yards. The Aggies (10-3) punctuated their inspiring turnaround under their first-year head coach by blowing out the short-handed Aztecs (11-2) for their first win over an AP Top 25 opponent since 2015.

“We felt all week that the only people that really, truly believed we could do this were the guys in the room,” Anderson said. “Across the country, all the conversation, all the chatter was really about San Diego State. I think we used that to fuel our week. ... I felt very confident, and we played our best ball when we had to have it.”

Bonner and Bowling followed Anderson from Arkansas State to Utah State, which hadn’t won a league title since its final year in the WAC in 2012. This surprisingly one-sided victory is the latest remarkable feat in the Aggies’ first season under a coach who moved 1,500 miles northwest for a fresh start after the death of his wife, Wendy, from breast cancer in 2019.

“We're unbelievably proud of this man and what he's gone through,” Bonner said. “Me and Brandon have known him longer than most guys. He's been through a lot in his life, and we were there for that. We followed him here because we believed in him, and we're so proud of him.”

Utah State earned a berth in the inaugural LA Bowl on Dec. 18 at SoFi Stadium, the Los Angeles Rams’ multibillion-dollar arena located about 12 miles northwest of the site of this victory at San Diego State’s temporary home. The Aggies are likely to face Oregon State.

Jordon Brookshire passed for 117 yards for San Diego State, which had its four-game winning streak snapped in the school’s most lopsided loss since a 35-point defeat at Ohio State in September 2013. Texas transfer Byron Vaughns won the game's defensive MVP award while leading Utah State's dominant defensive effort in holding the Aztecs to 178 yards and no touchdowns in the first three quarters.

Utah State's 46 points were the most ever scored in a Mountain West title game, and the most allowed in Aztecs coach Brady Hoke's two stints and four seasons at SDSU, which fell short on the brink of its first conference title since 2016.

“We didn't accomplish the goals we always set,” said Hoke, whose defense allowed just 17.3 points per game in the regular season. “There's a lot of football teams that would like to be 11-2. We'd like to be 12-1.”

The Aztecs played without starting tight end Daniel Bellinger, two additional tight ends, receiver Tyrell Shavers and more than a dozen other backups due to what the school termed “a medical concern.” San Diego State has declined to explicitly confirm any COVID-19 issues this season, but Hoke acknowledged the problems were COVID-related.

The current problems prevented the Aztecs from holding a full practice all week.

“We handled it, I thought, very well,” Hoke said. “Practice was a little different. We didn't have the bodies there, and that's what sets you back as much as anything. ... There's no excuses.”

Bellinger was the Aztecs’ second-leading receiver this season with a modest 29 catches in an offense that didn’t produce a 400-yard receiver. The backup absences also could have affected the Aztecs’ special teams mistakes, which included a punt that went off the back of Matt Araiza’s blockers and through the end zone for a safety in the third quarter.

Bowling was wide open when he caught a 58-yard TD pass moments after halftime, and he added a toe-tapping 18-yard TD grab late in the third quarter that essentially finished the mistake-prone Aztecs.

Utah State: What a finish for the Aggies, who sprinted past the frontrunners at the tape to win it all. Anderson took over a team that went 1-5 amid a tumultuous coaching change last season, but his group already exceeded all expectations by making the Aggies’ first conference title game since their inaugural year in the Mountain West in 2013.

San Diego State: The Aztecs had a massive letdown after a resilient season under Hoke, who produced the first 11-win season in the school's 99 years of football competition. The COVID problems mostly didn't affect their starters, which means no asterisk should be attached to this dispiriting loss.

San Diego State: Most likely the Arizona Bowl or the Frisco Bowl.