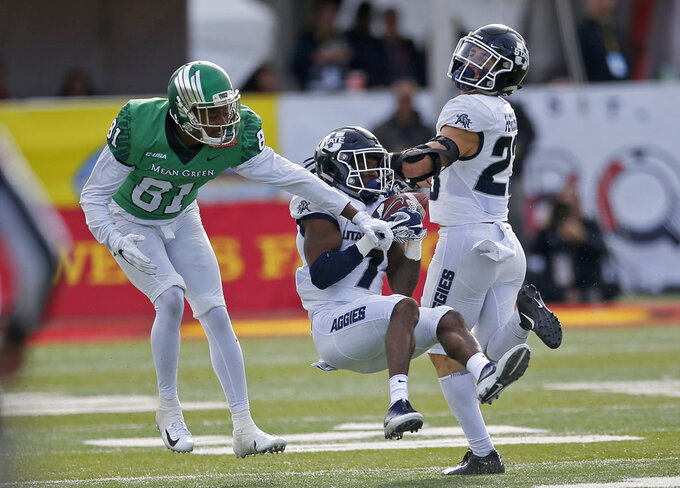 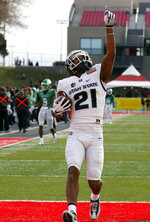 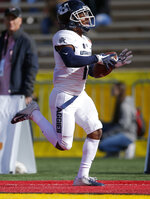 ALBUQUERQUE, N.M. (AP) — Utah State walked into the New Mexico Bowl with one of its best records in school history but uncertainty. Its head coach, Matt Wells, left to take the Texas Tech job. Interim coach Frank Maile had to prepare the Aggies with an army of graduate assistants and an announcement a new coach was coming next month.

The Aggies pushed those distractions aside Saturday.

Jordan Love threw for 359 yards and four touchdowns and Jalen Greene had six catches for 151 yards and a score to help Utah State rout North Texas 52-13.

Maile directed the Aggies (11-2) even after Utah State announced former head coach Gary Andersen would return. However, Andersen opted not to attend the bowl game and let Maile finish what he started.

Maile said he did his best to get the offense ready. The rest was up the players, he said.

"The guys have lot of efforts to doing their jobs," Maile said. The defense is set up for everybody to make plays."

Love said receivers were able to get open, find space and get yards after the catch. "We've been doing that all season," he said.

Fine was injured in the first quarter, and the Mean Green ended up using four quarterbacks. Jalen Guyton had four catches for 103 yards a score.

Littrell said Utah State was the best team the Mean Green faced all season. "We didn't have enough in us today to make more plays to have success," Littrell said.

When Fine came up limping following a nine-yard run in the first quarter, the whole complexion of game changed. "I don't ever want to put him in harm's way and he is so tough," Littrell said. "He wants to do everything he can for his teammates. But as the head coach, sometimes enough is enough."

After the game, North Texas officials announced that Fine had a severe left strained hamstring. This is the second time in three years that Fine most of or all of the Mean Green's bowl game after a shoulder injury kept him out of the 2016 Heart of Dallas Bowl.

Cornerback Kemon Hall said it was painful to see his teammates injured but players are trained to always be on standby. "You've always got to stay ready," he said. "You hate to see guys do bad or people get hurt."

UTAH STATE: Maile was tasked with preparing the Aggies with a staff of graduate assistants in coordinator spots. Players had to handle the distractions and constant questions over the future leadership of the Aggies and how it would affect their chances in the bowl game.

NORTH TEXAS: Coach Seth Littrell announced this week he would stay with the Mean Green to build on what he started when he took over a team that was 1-11 in 2015. Since then, he has a 23-17 but has yet to win a bowl game in three straight appearances.

UTAH STATE: Andersen returns as head coach and takes over a program that is rising. Sophomore quarterback Love and junior running back Bright are returning to build on an offense that broke a school record in touchdowns.