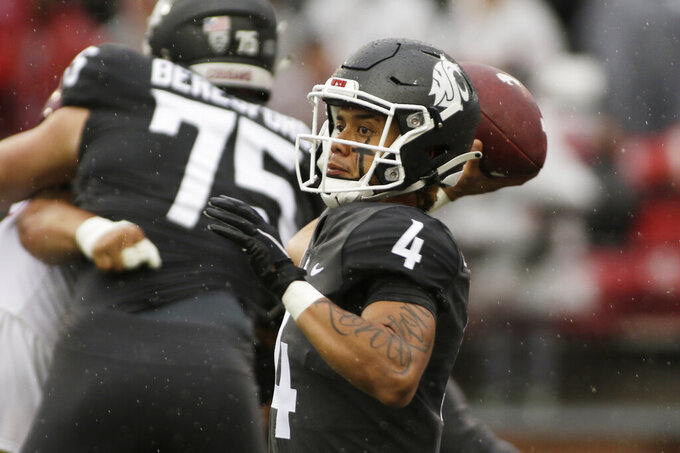 The Utes (1-2) head into their Pac-12 opener against Washington State (1-2, 0-1 Pac-12) on Saturday with a ton of question marks on that side of the ball. Utah ranks eighth in the league in total offense (372.3 yards per game) and scoring offense (29.3 points per game). The Utes put up gaudy numbers in a season-opening win over Weber State but struggled to extend drives in back-to-back losses to BYU and San Diego State.

Consistently moving the chains is essential in a league filled with potent offenses.

“That’s the most important question we have in our program right now,” Utah coach Kyle Whittingham said. “We haven’t really been as physical running the football as we anticipated we were going to be. We’re not throwing the football for as much production as we need to. We’re not throwing it badly, but we’re not getting out of it what we need to in order to win games.”

Cameron Rising could be a catalyst for helping the Utes reverse course.

Rising replaced Charlie Brewer at quarterback late in the third quarter of Utah’s 33-31 loss to the Aztecs. He led a fourth-quarter comeback and helped the Utes score touchdowns on three straight drives to push the game into triple overtime. The redshirt sophomore threw for 153 yards and three touchdowns and added 46 yards on five carries.

Now Rising is the starter going forward. He’s confident Utah can still be a factor in the Pac-12.

“We got everything we need on this team right now,” Rising said. “Just need to make sure we go out there and play with swagger from the get go.”

Washington State faces its own quarterback dilemma. Jayden de Laura remains day-to-day after suffering an injury late in the first half in a 45-14 loss to USC. De Laura returned for a few second-half plays before backups Cammon Cooper and Victor Gabalis took over.

If he can’t go, Jarrett Guarantano could get the nod Saturday. Guarantano started the season opener against Utah State before missing the Cougars’ last two games with an injury.

After Washington State totaled just 87 yards against USC while De Laura was on the sidelines, the Cougars are concerned about keeping pace with Utah on both sides of the ball.

“They have a defense-minded head coach. They have a reputation of being physical, tough. They’ve got experienced playmakers on offense, too,” Washington State coach Nick Rolovich said. “You would assume they are considered a defense-minded team, but they are not opposed to being explosive and putting some points on the board.”

After losing the starting quarterback job to Rising, Brewer left the Utah football program Tuesday. The senior transfer from Baylor was named starting quarterback at the end of fall camp and made three starts for the Utes. He totaled 484 yards, three touchdowns, and three interceptions.

The offense increasingly sputtered until Brewer was finally benched against San Diego State. He completed only 56% of his passes over his final two games and averaged just 4.8 yards per attempt.

Before transferring to Utah, Brewer threw for 9,700 yards and 25 touchdowns in four seasons at Baylor and led the Bears to the 2020 Sugar Bowl.

Washington State’s loss to USC marked the fourth time in seven games under Rolovich that the Cougars squandered a double-digit lead. One of those times came against Utah last season. Utah rallied behind backup quarterback Drew Lisk to beat Washington State 45-28 after being down 28-7 at halftime.

It doesn’t matter who starts the fight,” Rolovich said. “We need to be better at finishing the fight.”

Utah's Jadon Redding is enduring some uncharacteristic struggles after ranking high in the Pac-12 in multiple kicking categories last season. Redding went 8-of-8 on field goals and 17-of-17 on PATs a year ago. This season, he has missed a pair of PATs and a pair of field-goal attempts through his first three games.

Whittingham believes Redding will get back on track.

“He’s a mentally tough kid,” Whittingham said. “With kickers, you have to forget.”