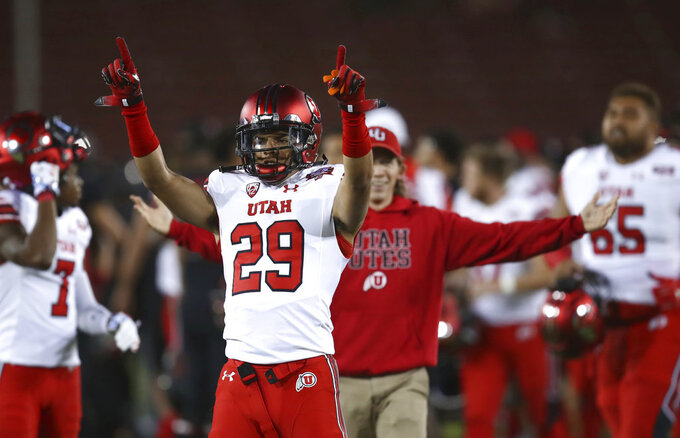 After leading the Pac 12 in rushing defense in 2015 and 2016, the Utes slipped to third place a year ago. Only one league opponent, Washington State, failed to generate at least 100 yards on the ground against Utah.

It is a much different story this time around as the Utes prepare to host Arizona on Friday. Utah has allowed 42 total rushing yards in its last two games against Washington State and Stanford. The Utes are allowing just 2.6 yards per carry in Pac-12 play.

"It's the best defense in the league right now," Arizona coach Kevin Sumlin said. "They play well together. They haven't given up a bunch of big plays. They've really limited people in their run game."

One major contributing factor to Utah's success is an ability to get third down stops. Opponents are converting just 31.1 percent of third downs into first downs against the Utes, the lowest rate among Pac-12 teams.

"Winning third downs is like a mini-turnover and gets the ball back to your offense," Utah coach Kyle Whittingham said. "Third down is the money down. You play first and second downs to set up the third down and third down is what it is all about."

Going up against Utah's defense will be a major concern for the Wildcats. Arizona's offense has leaned on the running game to compensate for Khalil Tate's struggles while adjusting to a new system and dealing with nagging injuries.

Tate, one of the team's best running threats a year ago, has 69 total rushing yards in three Pac-12 games. It's a stark turn from 2017 where he averaged 201.2 rushing yards in his first six league games.

Sumlin attributes lower numbers, in part, to teams changing how they defend the junior quarterback.

"As you start to develop some other things in the running game and some other attacks, you're seeing some different defenses now," Sumlin said. "He's just got to take advantage of what he sees."

Arizona will face a dilemma in figuring out how to slow Utah's running attack.

"We have a heck of a running back in Zack Moss and we have to utilize him," Whittingham said.

Other things to note ahead of Friday's game between Arizona and Utah:

FANTASTIC FOUR: Both Utah and Arizona picked up Pac-12 wins last weekend by getting opponents to repeatedly cough up the ball. The Wildcats forced four second-half turnovers in a 24-17 win over California — turning two into defensive touchdowns. The Utes also forced four turnovers against Stanford. Two takeaways were back-to-back red zone interceptions in the first half — including a 100-yard pick six by Jaylon Johnson.

CHASING THEM DOWN: Moving Chase Hansen from safety to linebacker this season has boosted Utah's defense. Hansen ranks third nationally in tackles-for-loss per game (2.0) and his team-high 10 tackles-for-loss ranks second among Pac-12 players. He has a team-high 43 tackles and is second with 3.0 sacks.

TACKLING SCHOOL: Collin Schooler has emerged as one of the more disruptive defensive players in the Pac-12 this season. Schooler has accumulated a Pac-12 best 11 1/2 tackles-for-loss in six games. He has 25 TFL in 19 career games. The sophomore leads Arizona with 66 total tackles through five games.

KICKING IT: After a slow start, Matt Gay has reclaimed his dominant form from last season. Gay has made six straight field goals for Utah, after going 4 of 4 against Stanford. The 2017 Lou Groza Award winner leads the Pac-12 in field goals (8) and field goals per game (1.60). He led the nation in those same categories, along with field goal attempts and 50-plus-yard field goals, a year ago.