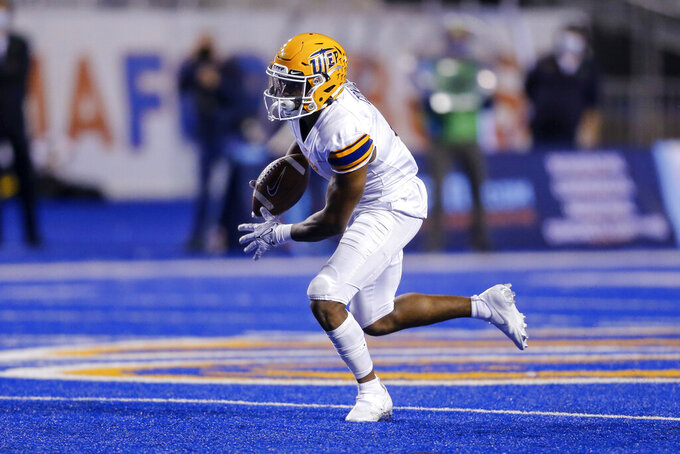 FILE - UTEP wide receiver Jacob Cowing (6) runs with the ball on a 38 yard touchdown reception in the first half of an NCAA college football game against Boise State Friday, Sept. 10, 2021, in Boise, Idaho. Former WAC rivals UTEP and Fresno State are each playing in a third New Mexico Bowl but both schools enter Saturday’s game winless in the event. (AP Photo/Steve Conner, File)

Line: Fresno State by 11.5, according to FanDuel SportsBook

For the Bulldogs, a victory would give them a 10-win season for the third time in the past five seasons and provide significant momentum for incoming head coach Jeff Tedford’s second stint with the team after Kalen DeBoer bolted for Washington after two seasons.

The Miners are looking for an eight-win season for the first time since 2005 and just the 11th time in school history, while coach Dana Dimel is seeking his first bowl victory.

UTEP receiver Jacob Cowing lining up against Fresno State defensive back Evan Williams should bring marquee attention. Cowing had the second-best receiving effort in school history with 67 catches for 1,330 yards and seven scores. Williams not only led the Bulldogs in tackles with 89, but his three interceptions and six pass breakups also were team bests. For good measure, he recovered two fumbles, forced another one and recorded 4.5 tackles for loss.

Fresno State: The Bulldogs boast a quick-strike offense with 11 scoring drives of a minute or less thanks to the big arm of quarterback Jake Haener. Haener frequently dominated, throwing for more than 3,800 yards and 32 touchdowns. Haener’s status, however, is in limbo as he originally jumped into the transfer window when DeBoer left. He later reconsidered and withdrew his name from the portal but interim coach Lee Marks has been mum about who is going to start under center.

UTEP: Miners defensive end Praise Amaewhule frequently tries to take up residence in opposing backfields, finishing with 13 tackles for loss, including 5.5 sacks and another 10 quarterback hurries.

Fresno State has lost the pregame coin flip nine times this season. … Eight is a magic number, equaling the number of times the Bulldogs have passed for more than 300 yards and rushed for at least 100 yards. … Bulldogs running back Ronnie Rivers is all over the school record book as the career leader in total touchdowns (51), rushing TDs (40), pass receptions by a running back (150) and receiving TDs by a running back (11). … Fresno State lost to Colorado State 40-35 in the 2008 New Mexico Bowl, and followed that up a year later with a 35-28 loss to Wyoming. …UTEP lost its two previous New Mexico Bowls, 52-24 to BYU in 2010 and 21-6 to Utah State in 2014. … Since their last bowl win, the Miners have lost six straight. …With 34 passing yards, Miners quarterback Gavin Hardison will reach the 3,000-yard mark, a total no Miners quarterback has surpassed since the 2009 season.