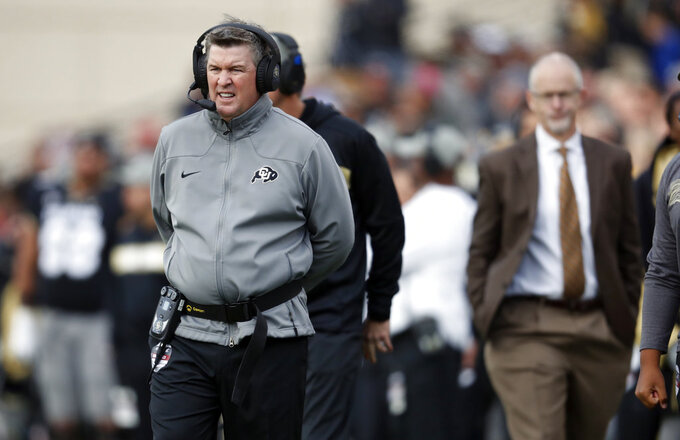 FILE - In this Saturday, Nov. 10, 2018, file photo, Colorado head coach Mike MacIntyre watches during the second half of an NCAA college football game against Washington State in Boulder, Colo. The Buffaloes have followed up that 5-0 start with five straight losses and now are simply trying to become bowl eligible amid reports suggesting MacIntyre’s job is in jeopardy. (AP Photo/David Zalubowski, File)

"I've never had a season where going into the 10th game of the year we had nine starters out that started the first game, nine!" MacIntyre said following his team's 31-7 drubbing at the hands of Washington State.

"And four other significant players out. Basically, a third of your guys that you play, that you count on to win games, aren't out there," added MacIntyre, who's feeling the heat with his team in danger of missing out on a bowl game after starting out 5-0 and cracking the Top 25.

At about the same time MacIntyre was lamenting his long list of injuries, Utah was wrapping up a 32-25 victory over Oregon State after losing quarterback Tyler Huntley and star running back Zack Moss, the biggest reasons for their rise in the rankings, to season-ending injuries.

Utah kept its grip on the Pac-12 South race as freshman quarterback Jason Shelley won his first start, throwing for 262 yards and rushing for both of the Utes' touchdowns

"The moment wasn't too big for him," said coach Kyle Whittingham.

Utes junior running back Armand Shyne rushed for a career-best 174 yards in his first start in two years.

"It has never been a case of his ability to carry the football. He's a natural and that's something you don't really coach. You either have that or you don't," Whittingham said.

Other subplots in Colorado's 500th game at Folsom Field, which opened in 1924:

GAY'S DAY: Utah senior kicker Matt Gay, who is coming off a record-setting game in which he scored 20 points and made all six of his field goal attempts, credits his success to playing Division I soccer at Utah Valley.

Whittingham said settling for a half dozen field goals isn't usually the recipe for success.

"He was really the difference in the game," Whittingham said. "It's usually a case where a bunch of field goals won't win it for you, but in this case it was the exception."

SHENAULT BACK: The Buffs are hoping for more impact from star sophomore Laviska Shenault Jr., who was the nation's leading receiver before being sidelined for a month by a right turf toe injury. He returned last week and had 10 catches for 102 yards plus an 18-yard run. But he was unable to add to the 11 TDs he'd scored in his first 5½ games.

BUDDING RIVALRY: Although the Pac-12 pits the Utes and Buffs against each other in rivalry week, this series hasn't organically risen to that level quite yet. Utah is 5-2 since the series was renewed after a 49-year dormancy when both schools joined the Pac-12 in 2011.

"Rivalry, it's starting to feel a little bit that way, but I think we've got that same feel with USC," Whittingham said. "That's something that has to play out and evolve, you can't force-feed that or make that happen. ... I don't think it is a full-on, full-fledged rivalry at this point."

GOING BOWLING: While the Buffs are seeking bowl eligibility for just the second time in 11 seasons, the Utes are bowl-eligible for the 13th time under Whittingham, whose 11-1 record in bowl games represents the highest (92) winning percentage in NCAA history.

TROPHY TIME: The Utes can win their first Pac-12 South title by beating Colorado and with Arizona State losing either to Oregon or Arizona in the next weeks. If Utah and Arizona tie for the title, the Utes own the tiebreaker.

"We were calling it earlier in the season," Utes linebacker Cody Barton said. "This is our year to win the south. Our hopes and dreams are still alive and it feels great."