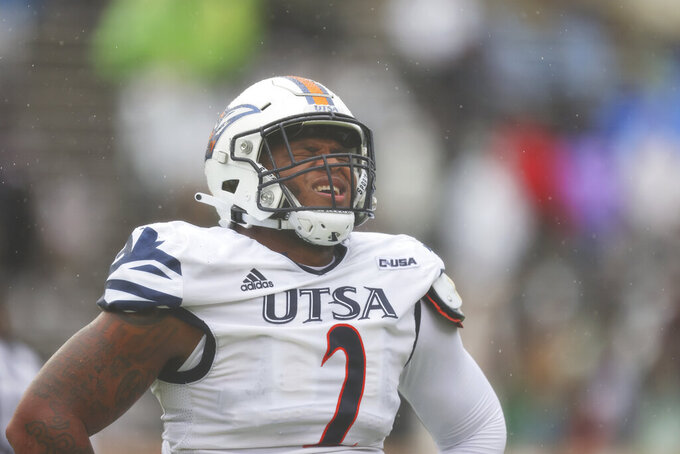 UTSA linebacker Charles Wiley reacts after a play during the first half of an NCAA college football game against North Texas in Denton, Texas, Saturday, Nov. 27, 2021. (AP Photo/Andy Jacobsohn)

SAN ANTONIO (AP) — The past is ever present in a historic season of firsts for UTSA.

The Roadrunners will compete for its their Conference USA championship when they host red-hot Western Kentucky on Friday night at the Alamodome.

Facing the Hilltoppers’ prolific offense for a second time this season is formidable but overcoming their first loss could be just as daunting for the Roadrunners.

UTSA was undefeated and ranked in the AP Top 25 for six straight weeks before suffering a crushing, 45-23 loss at North Texas last week. The outcome was apparent at halftime.

“There are only three teams that hadn’t lost before we went down,” UTSA coach Jeff Traylor said. “Everybody else had to handle a loss, let’s see how we handle it.”

UTSA (11-1, 7-1 CUSA) won its first West division title despite the loss while Western Kentucky (8-4, 7-1) is seeking its third C-USA championship since winning back-to-back titles beginning in 2015.

Playing inside the Alamodome will be a welcome change after the Roadrunners suffered through rain, wind and 30-degree temperatures last week against the Mean Green. The hope is that a big crowd will also prove challenging for the Hilltoppers.

“I do think that crowd noise will definitely be a factor in this game,” Western Kentucky coach Tyson Helton said. “We’ve been preparing for that in our daily practice routine.”

The Hilltoppers have been using silent counts and hand claps all season, not that anything has phased Bailey Zappe, who has passed for 4,968 yards and 52 touchdowns this season. He completed 38 of 60 passes for 523 yards and five touchdowns against UTSA on Oct. 9, but his interception in the final minutes sealed a 52-46 loss — their third in a row at the time.

The Hilltoppers have won seven straight since then.

“I think those losses really helped make us stronger and bring us tighter together and allowed us to re-evaluate our strengths and our weaknesses,” Helton said.

Can UTSA do the same after its first loss?

“What are you going to do with a crisis,” Traylor said. “And getting our teeth kicked in Saturday – are we going to make that a good thing or a bad thing? We’ll find out on Friday.”

To do so, UTSA's offense will have to return to form. Led by senior quarterback Frank Harris and junior running back Sincere McCormick, the Roadrunners are averaging 36.9 points per game.

The 6-foot-1, 220-pound Zappe has thrown for nearly 5,000 yards and all those touchdowns — both of which lead the NCAA — but still has his doubters. To them, Helton says review the tape.

“Tell them to watch the Michigan State game at Michigan State,” Helton said, where Zappe was 46 of 64 for 488 yards and three TDs in a 48-31 loss. “I think that’s pretty good competition. Those stats speak for themselves. And then you go on the road at Army. Tough environment to play at the time. They were on a win streak that was pretty long. I thought that was another good example.”

Zapped passed for 435 yards and three touchdowns in the 38-35 loss to Army.

Zappe is understandably receiving a great deal of attention, but that doesn’t mean Harris enjoys being ignored. The UTSA QB has rebounded after missing all but four games in his first two seasons due to ACL tears and being limited by a sprained knee in 2020.

“I know he takes it very personal that people only talk about Bailey Zappe, nobody ever speaks about Frank,” Traylor said. “That’s just the way I want it with Frank. He loves to be doubted. He’s been doubted most of his career whether that be injury, whether that be his throwing form, whether that be, ‘He won’t stay in the pocket.’ He takes all that stuff like great competitors do. He wants to prove to people that he’s a good quarterback, that he’s a championship quarterback.”

Reviewing last week’s loss to North Texas proved just as nauseating for Traylor as the game itself.

“Of course, the plane ride was just as rough as the game was,” Traylor said. “I asked the pilot what was the plane ride going to be like and he said, ’It’s going to be rough, coach. We’re going to go through a bunch of weather.' I’m like, ‘Joy.’ I’m watching the game riding a a bucking bronco, it felt like.”

The Roadrunners’ home attendance has grown steadily this season and they are hoping for the largest yet in their final home game. A season-high 35,147 watched UTSA defeat UAB, surpassing the previous high of 30,105 set a week before against Southern Mississippi.

The Roadrunners are anticipating a crowd of at least 40,000 on Friday.

UTSA had a school-record crowd of 56,743 at its inaugural game against Northeastern State on Sept. 3, 2011, setting a record for the largest crowd for an NCAA Division I FBS start-up program.