Vanderbilt gets Neal back at QB, Kentucky looks to rebound 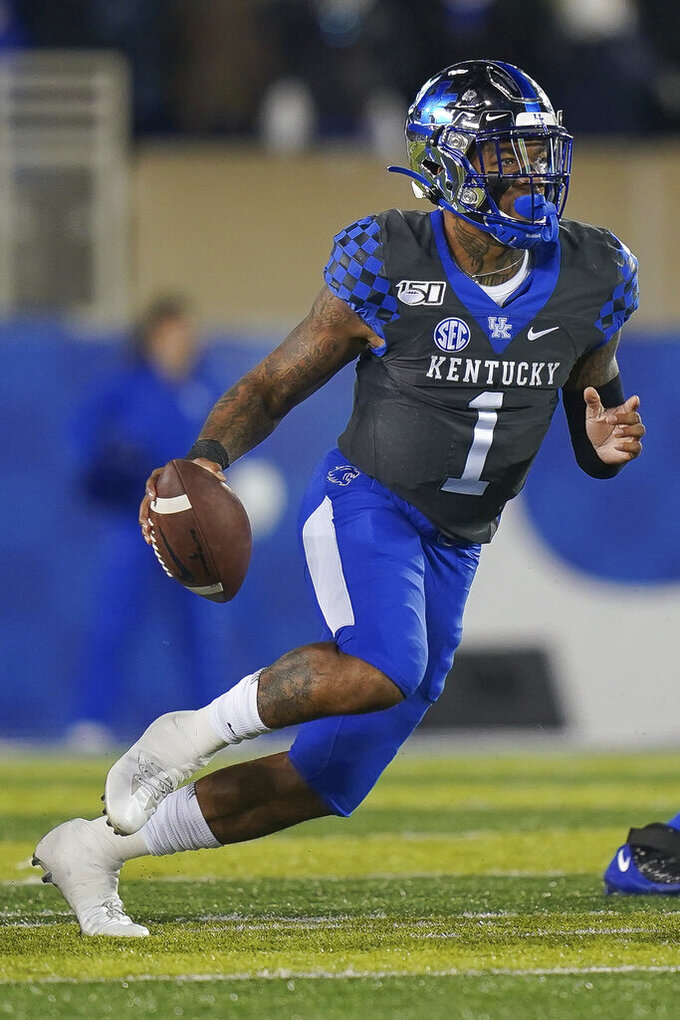 Kentucky quarterback Lynn Bowden Jr. (1) runs with the ball during the first half of an NCAA college football game against Tennessee, Saturday, Nov. 9, 2019, in Lexington, Ky. (AP Photo/Bryan Woolston) 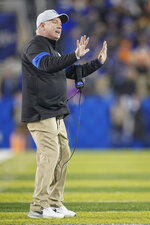 NASHVILLE, Tenn. (AP) — Vanderbilt coach Derek Mason is trying to get the Commodores to focus on the immediate task of playing Kentucky with three games left in a disappointing season.

Kentucky coach Mark Stoops is bouncing between Wildcats fans worried they will lose him to Florida State while he tries to focus on the job he has right now.

“I guess it’s better than the alternative, right?” Stoops said. “See, I never get too far in front of my skis. Trust me, let’s worry about Vandy and that’s all my concentration is. Our team was ready, and we’ll get ‘em ready again, and that’s all it is. But yeah, you’re right. That’s the nature of this job.

“One week they love, and the next week they’re trying to run you out of here.”

Stoops and his Wildcats (4-5, 2-5 Southeastern Conference) still have bowl hopes with three games left, even after a 17-13 loss to Tennessee last week. They visit Vanderbilt on Saturday looking for a fourth straight victory in this series to put them a step closer to salvaging a challenging season.

Vanderbilt (2-7, 1-5) has lost four of its last five with the lone victory an upset of then-No. 22 Missouri. Mason wants his Commodores focused a day at a time needing to finish with three straight victories, then hope a team is needed to fill a bowl commitment so Vandy’s academic success might clinch a berth.

Mason is turning back to Riley Neal, the first of three different quarterbacks to start for Vanderbilt.

“The carousel of quarterbacks for us has not led to consistency ...,” Mason said. “We got one game this week in Kentucky.”

“I know Coach Mason is going through a hard time right now, and again, just like all of us in the league, there’s no mercy,” Stoops said. “Look around the league, it’s hard on all of us.”

Some other things to know about the Kentucky-Vanderbilt matchup:

Neal, the graduate transfer from Ball State, traveled with the Commodores to Florida but only watched as Deuce Wallace started. Yet neither Wallace nor Alan Walters could get the offense moving. Neal, benched himself against Missouri, was hurt in the loss at South Carolina after his best start this season. Neal was 3 of 4 for 45 yards with a 26-yard TD pass before leaving the game.

Lynn Bowden Jr. leads the SEC in all-purpose yards averaging 145.9 yards per game since the wide receiver moved over to quarterback for Kentucky. He’s averaging 153.3 yards rushing in his four starts since the position change, and he’s a threat to throw occasionally. Mason said that makes Bowden so very dangerous and compared the junior to Randall Cobb, now with the NFL’s Dallas Cowboys.

“If you feel like nothing’s coming, you better get your eyes around because he’s coming, Mason said. “And he’s gone.”

Stoops hopes to get back a pair of wide receivers in Bryce Oliver and Ahmad Wagner back against Vanderbilt. Oliver has four catches for 93 yards, while Wagner has 13 receptions for 249 yards and two TDs while averaging 31.1 yards per catch.

This month has been very good for the Commodores since 2015 when hosting SEC teams. Vanderbilt has beaten both Mississippi and Tennessee twice (2016 and 2018) and has five victories at home over SEC teams. But Kentucky hasn’t lost to Vanderbilt since 2015 — in Nashville.