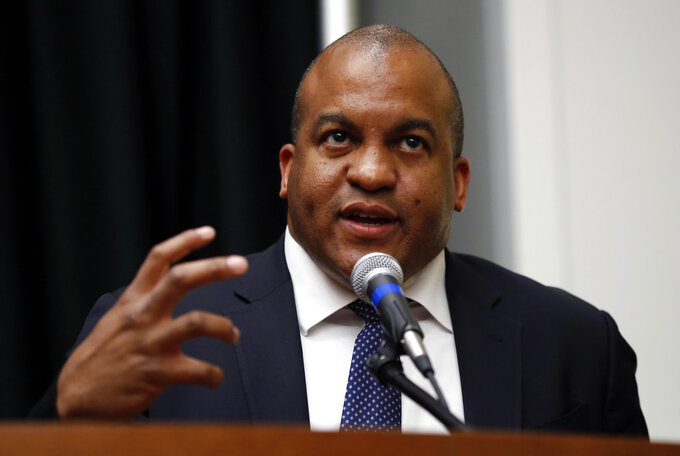 "Malcolm didn't come up through college athletics but I think he is a great fit for Vanderbilt," Zeppos told The Associated Press.

Turner will start Feb. 1 and replace David Williams, the first African-American athletic director in the SEC, to cap a search that started in September.

"Vanderbilt is a really special place and offering that rare combination of student-athletes and that commitment to an opportunity for excellence on and off the field was just a very compelling proposition for me," Turner said.

Zeppos introduced Turner on a conference call with reporters Tuesday and said Turner was a top candidate from the first names suggested by the search firm used by Vanderbilt. Zeppos sees Turner's experience will give him a sense of where college athletics are going.

"The strategic thinking and the ability to kind of say this is where this should be going, it was very, very important to me," Zeppos said.

A graduate of North Carolina, Turner earned both law and M.B.A. degrees from Harvard. He was a senior vice president at OnSport, a North Carolina-based sports and entertainment consulting firm that worked with the NBA, NFL, MLB, NASCAR and also media rights in both professional and college sports. After being acquired by Wasserman Media Group, Turner worked for the consulting division as managing director helping launch the company's golf division.

He became the third president of the G League in 2014, and he worked on both coach and player development and pushed for two-way contracts with the league adding 10 clubs. He will be replaced as G League president by 12-year veteran Shareef Abdur-Rahim, currently the NBA's vice president of basketball operations.

Turner also has been on advisory boards for Teach for America, North Carolina's Kenan-Flagler Business School, the UNC Board of Visitors and the board of the Morehead-Cain Scholarship Fund.

John Ingram, chairman of the Vanderbilt Board of Trust and a member of the search committee, called Turner a unique candidate and a perfect fit.

"I'm excited to assist and support Malcolm as we write this next chapter in Commodores history," Ingram said in a statement.

Vanderbilt faces a unique challenge in the SEC landscape fighting for attention and support in Nashville, which has become a professional market with the addition of the NHL's Predators and the NFL's Tennessee Titans in the late 1990s. This also is the SEC's smallest and only private university with a small local alumni base along with high academic standards.

In the NCAA's last Academic Progress Rate for the 2016-17 academic year, 11 Vanderbilt programs finished with perfect 1,000 APR scores with the football team No. 2 nationally. Yet under Williams, Vanderbilt won four national championships in baseball (2014), women's tennis (2015) and women's bowling (2007 and 2018). Football just earned its second bowl berth in three seasons.

"The business background certainly will be important for him in looking at the whole range of revenues, expenses, facilities working with a very talented management team and putting this all into a big and bold university strategic plan," Zeppos said.

Williams also will be available for questions staying on campus as a full-time law professor overseeing a Sports, Law & Society program at Vanderbilt Law School. Turner called Williams a "legend" and someone whose expertise he plans on tapping.

"He certainly leaves a wonderful legacy, and I'm intent to build upon the fine work he and his team have already done," Turner said. "I really believe the foundation is showing the future is bright, and I couldn't be more optimistic about what we can accomplish together as a Commodore community."

Turner said he discussed the future of Vanderbilt's athletic facilities in general while interviewing for this job. Vanderbilt Stadium, home of the football program, had its last major renovation in 1981. Turner said he plans to start by listening to athletes, coaches and the Vanderbilt community first.

"Certainly we will develop an athletic strategic plan to help us build and grow the program," Turner said.