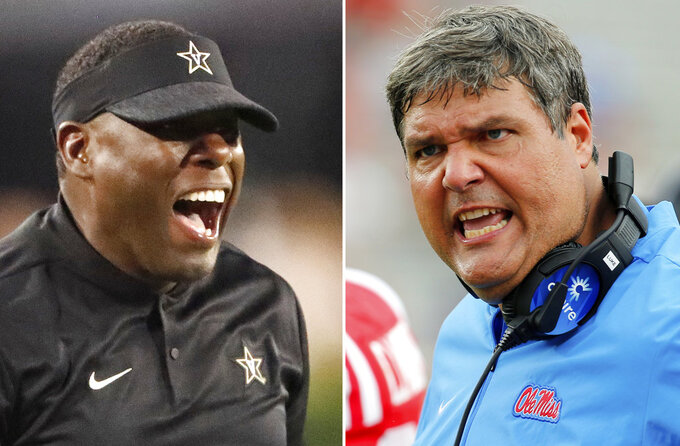 FILE - At left, in an Oct. 6, 2018, file photo, Vanderbilt head coach Derek Mason yells at an official during the first half of an NCAA college football game against Georgia, in Atlanta, Ga. At right, in a Sept. 22, 2018, file photo, Mississippi head coach Matt Luke encourages his players during the second half of the NCAA college football game against Kent State, in Oxford, Miss. Vanderbilt hosts Mississippi on Saturday, Nov. 17. (AP Photo/File)

NASHVILLE, Tenn. (AP) — The Vanderbilt Commodores have no time left to lament the four games that have slipped through their grasp because they couldn't make the play to finish off a victory.

With two games remaining, the Commodores must win out if they want to play in a bowl for the second time in three seasons.

Junior receiver Kalija Lipscomb says it's a bit frustrating that the Commodores (4-6, 1-4 Southeastern Conference) have had issues playing a full 60 minutes each game. But Lipscomb says they know they're close and almost beat three Top 15 teams. Instead, they've lost four of their last five.

"We have to put four complete quarters together, and hopefully we do that this week," Lipscomb said.

Now the Commodores host another team disappointed with its record in Mississippi (5-5, 1-5) on Saturday night. They beat Ole Miss when the Rebels visited two years ago as part of Vandy's push for Mason's first bowl game as a head coach. Now the Rebels have lost three straight including last week's 38-24 loss to Texas A&M despite one of the nation's best offenses.

Ole Miss coach Matt Luke and his Rebels face a quick turnaround too, playing the Egg Bowl on Thanksgiving. Luke has a similar message as Mason's, pushing his Rebels to finish games.

"They keep getting up off the mat to keep battling," Luke said. "The object of the game is to win, and that's what those guys want. They're coming up short, they're disappointed, frustrated, but we have 10 more days left to pour into it to find a way to get that win in the fourth quarter. We're going to pour everything in to these last 10 days to keep these guys fighting and competing and find a way to win this thing in the fourth quarter."

Some other things to know about Ole Miss and Vanderbilt:

The biggest surprise on the Ole Miss offense this season has been junior college transfer Scottie Phillips, who has run for 927 yards and an SEC-leading 12 rushing touchdowns. He had just four yards rushing against Texas A&M last weekend after suffering a sprained ankle in the first quarter. His status for the Vanderbilt is uncertain.

Ke'Shawn Vaughn has put together back-to-back games that ranks among the best in Vanderbilt history. He ran for 172 yards at Arkansas, and he topped that by running for 182 yards in the Commodores' 33-28 loss at Missouri last week. His 354 yards rushing in consecutive games is the best by a Vandy running back since Frank Mordica ran for 435 yards against Air Force and Tennessee in 1978. Vaughn ranks fourth in the SEC with 849 yards rushing and has nine TDs rushing.

The Ole Miss-Vanderbilt series has been very competitive over the past 13 years with the Commodores holding a 7-6 advantage during that span. Vanderbilt won six of eight in the series from 2005 to 2012 before the Rebels bounced back by winning four of the past five.

Vanderbilt linebacker Jordan Griffin is second in the SEC with 98 total tackles, and he's fourth with 50 solo tackles in a career season for the senior.

It's been a rough year for the Ole Miss defense, which ranks at or near the bottom of the SEC in many categories. One bright spot is the emergence of sophomore linebacker Mohamed Sanogo, who matched a career-high with 16 tackles against Texas A&M. He leads the team with 92 tackles and is fourth in the SEC with 9.2 tackles per game.