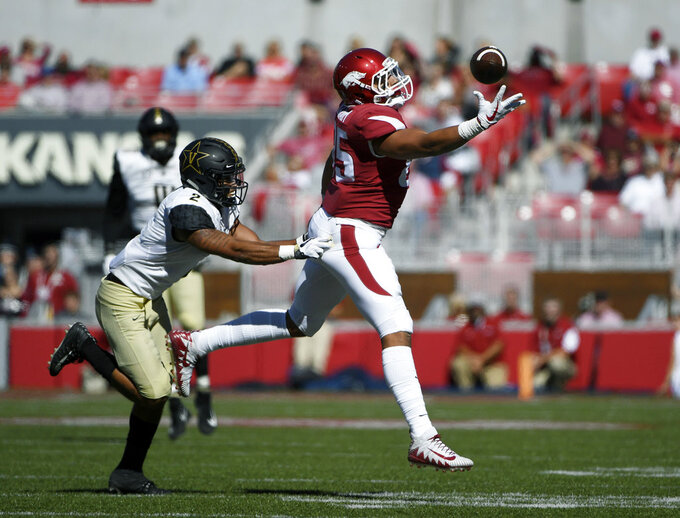 Arkansas tight end Cheyenne O'Grady makes a one handed catch in front of Vanderbilt defensive back Frank Coppet in the first half of an NCAA college football game Saturday, Oct. 27, 2018, in Fayetteville, Ark. (AP Photo/Michael Woods)

FAYETTEVILLE, Ark. (AP) — Vanderbilt coach Derek Mason had some fun this week at the expense of running back Ke'Shawn Vaughn, jokingly calling the junior "fat man" as he returned to practice after missing 10 days with an injury.

Mason might want to consider poking his bear of a running back more in the future after his performance on Saturday.

Led by a refreshed Vaughn, the Commodores earned their first Southeastern Conference victory of the season with a 45-31 win over Arkansas. The 5-foot-10, 222-pound Vaughn did much of the damage, rushing 26 times for 172 yards and three touchdowns in leading Vanderbilt (4-5, 1-4) to its first SEC win since a victory over Tennessee to end last season.

Vaughn's effort came a week after he missed the Commodores sluggish loss against Kentucky, and it was just in time for a team that had lost three in a row and five of its last six.

"It was just a good feeling being back out there on the team," Vaughn said.

Kyle Shurmur added a pair of touchdown passes to Jared Pinkney for the Commodores. Schumur finished 13-of-19 passing for 192 yards, and Pinkney had five catches for 93 yards and the two scores.

But it was Vaughn who set the tone in his return, breaking free for a 63-yard touchdown on for Vanderbilt's first score. He finished just short of his career-best of 180 yards rushing, set as a freshman with Illinois in 2015.

"We kept kidding (Vaughn), 'Do you need some oxygen,' in practice all week," Mason said. "He'd make a five-yard run and be huffing and puffing ... It was about getting that guy his touches and trying to get him in shape."

The Razorbacks have lost seven of their last eight games under first-year coach Chad Morris.

"At some point, we've got to make a step and do something to get us out of that rut," Morris said.

Four of Vanderbilt's five losses this season are to teams ranked in the top 15. The Commodores certainly looked battle-tested while rushing for 250 yards as a team - thanks in large part to the return of Vaughn - and kept their bowl hopes alive with games remaining against Missouri, Mississippi and Tennessee. "For us, we needed that in the worst way," Mason said.

Arkansas kicker Connor Limpert had his streak of 10 straight made field goals come to an end when he came up short on a 60-yard attempt at the end of the first half. The junior atoned for the miss, however, with a career-best 55-yard make in the third quarter. Limpert has now made 16 of 20 field goals this season, with five of his makes coming from 40 yards or more.

Vanderbilt defensive lineman Michael Owusu hit Storey during a pass rush in the third quarter, sending the quarterback to the ground. After the play, Owusu extended his arm — appearing to offer to help Storey to his feet — before quickly pulling his arm back and walking away after Storey reached up for help. "That's just football, it's talking some trash," Storey said.

Vanderbilt has a bye next week before traveling to Missouri on Nov. 10