Vedral set to play if Martinez unavailable against Gophers 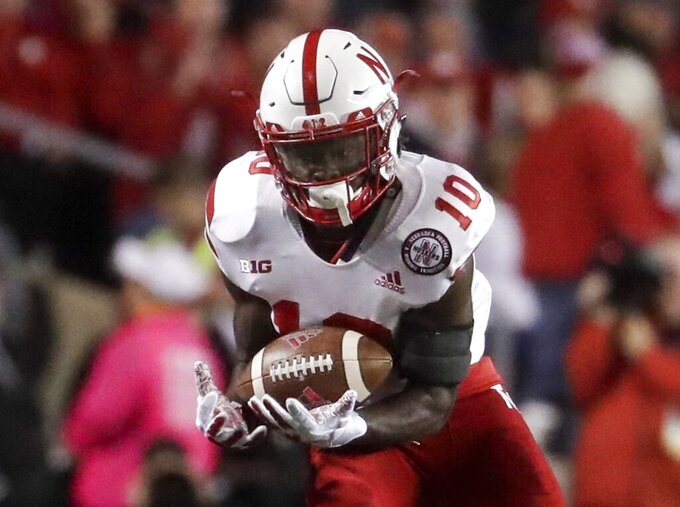 FILE - In this Saturday, Oct. 6, 2018, file photo, Nebraska's JD Spielman catches a long pass during the second half of an NCAA college football game against Wisconsin, in Madison, Wis. Nebraska starts the week of its trip to unbeaten Minnesota facing uncertainty about the health of two of its top players, quarterback Adrian Martinez and receiver JD Spielman. (AP Photo/Morry Gash, File)

LINCOLN, Neb. (AP) — Nebraska began preparing for this week's game at unbeaten Minnesota as if sophomore Noah Vedral would start at quarterback in place of Adrian Martinez.

Martinez limped to the sideline at the end of the third quarter of the Cornhuskers' win against Northwestern on Saturday and had ice on his left knee when he came out of the medical tent. He didn't practice Monday.

Coach Scott Frost, as per his policy, did not disclose the nature of Martinez's injury. If Vedral starts, freshman Luke McCaffrey would be the backup.

"We'll let the week develop and see where Adrian is, but we feel good about it if we have to go with Noah and Luke," Frost said. "Those guys got a bunch of reps today, and they've been repping a lot all through the fall. If it ends up being them, we're fine."

Top receiver JD Spielman also left the Northwestern game with a knee injury in the second half, and Frost offered no update on him other than to say, "He'll be all right."

Vedral quarterbacked the Huskers' last four series against Northwestern, and his first 11 plays netted just 17 yards. On the final possession, he hit Wan'Dale Robinson with a 32-yard pass and ran twice for 13 yards to set up Lane McCallum's 25-yard field goal as time ran out for a 13-10 win.

Asked about the prospect of starting, Vedral said, "It would be a lot of fun Saturday night. Nothing changes. The preparation is the same. We're focused on what they do. I'll be ready if that's my time."

Offensive lineman Matt Farniok said nothing changes if Vedral is the quarterback.

"Their job is to be ready no matter what happens, so if Adrian (goes) down, it's next man up," Farniok said. "We don't believe in a drop-off. He stepped up Saturday, he took control and did a fantastic job. He did exactly what we expect of him."

Vedral grew up 30 miles from Lincoln, in Wahoo, and has deep ties to the program.

His father, Mike Vedral, was a tight end from 1990-92, and three of his uncles also played for the Huskers. Jon Vedral was a wingback from 1994-96 and was a teammate of Frost's. Mark Vedral was a linebacker from 1998-2001. Matt Turman was a backup quarterback from 1994-96 and, as a walk-on, helped keep the '94 national championship season alive when he was the emergency starter in win at Kansas State.

Noah was a star three-sport athlete at Bishop Neumann High but received no recruiting interest from the previous Nebraska staff.

"It might have frustrated my uncles, my family, more so than me," he said.

Noah had impressed Frost at a camp at Oregon when Frost was the Ducks' offensive coordinator. He accepted a scholarship offer from Frost when Frost was head coach at Central Florida, and he served as backup to McKenzie Milton on the 2017 team that went 13-0. He appeared in eight games as a freshman and transferred to Nebraska after Frost was hired in December 2017.

Vedral's only quarterback appearances for Nebraska before last week were against Bethune-Cookman in 2018 and Northern Illinois on Sept. 14.

Frost said he originally recruited Noah to UCF because he knew his family and liked his athleticism, particularly his speed and passing ability.

"We saw something in him, and he hasn't disappointed us," Frost said. "He's been a really good player. If it is his turn to play on Saturday, I'll feel great about it."