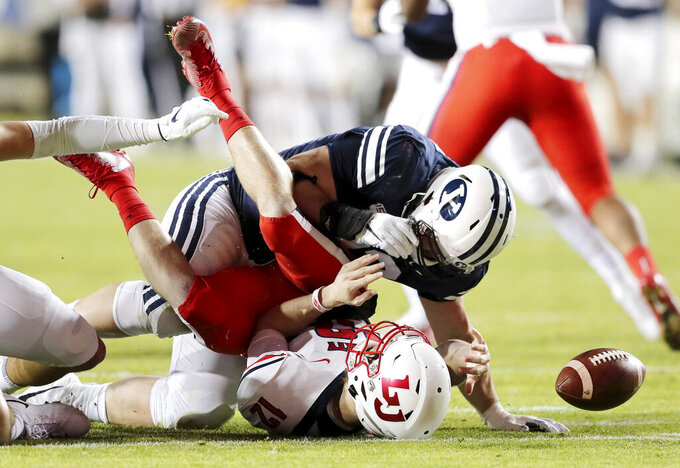 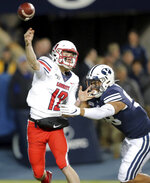 Virginia is on upset alert heading into its game against Liberty.

The Flames (6-4) are one victory away from becoming bowl eligible for the first time in program history. The Cavaliers (7-3), meanwhile, have already secured a bowl spot and after hosting Liberty will take on No. 25 Virginia Tech with the ACC’s Coastal Division title on the line.

But coach Bronco Mendenhall said the Flames have the Cavaliers’ full attention.

Mendenhall said while he said a letdown might be tough to avoid, “until you watch Liberty on film, and that's just a quick reality check.”

In his first year at Liberty, coach Hugh Freeze likes the way his team seems to be approaching the challenge. The Flames, like Virginia, are coming off a bye week.

“For us to find a way to go to their place and compete is going to be a tall task, and it’s one that our kids are really excited about,” Freeze said this week. “I could tell it yesterday. I was kind of shocked, actually, by the energy our kids had after a weekend off.”

Virginia, despite its injuries in the secondary, ranks 23rd nationally, allowing just 193.5 yards per game through the air. A big part of that credit goes to its front seven, which is primarily responsible for the Cavaliers’ eighth-place standing nationally with 34 sacks.

Some other things to watch when Liberty visits Virginia:

The Calvert-Gandy-Golden combination has given teams fits for years and they have rewritten the Flames’ passing and receiving record book, so they figure to be a tall order for the depleted Cavaliers on the back end. A few big plays could quickly change the complexion of the game.

Virginia’s Bryce Perkins and Oklahoma’s Jalen Hurts are the nation’s only QBs with 2,400 passing yards and 450 rushing yards, and Perkins is No. 14 nationally with 2,932 yards of total offense. Mendenhall may want Perkins to resist his urge to run in order to protect himself from injury with the critical game against the Hokies looming so the Flames may be spared a full-on look at the dual-threat QB.

Calvert and Perkins are both on the list of quarterbacks with the most passing attempts since being intercepted. Calvert, who threw 18 interceptions last season, including three at Virginia, has thrived under Freeze and gone 281 attempts without a pick. Perkins hasn’t been intercepted in his last 100 attempts.

Liberty is 0-7 in its history against ACC opponents, including a 24-0 loss to Syracuse it its season opener. That, a desire to secure that first bowl bid and a chance to stamp themselves as another FBS program in Virginia to reckon with will be a strong source of motivation.

The teams met for the first time last November with Virginia winning 45-24. But the Cavaliers led just 24-17 at halftime before scoring three of the four touchdowns the teams combined for after halftime. Calvert has 88 career touchdown passes but did not throw one in the loss to Virginia.