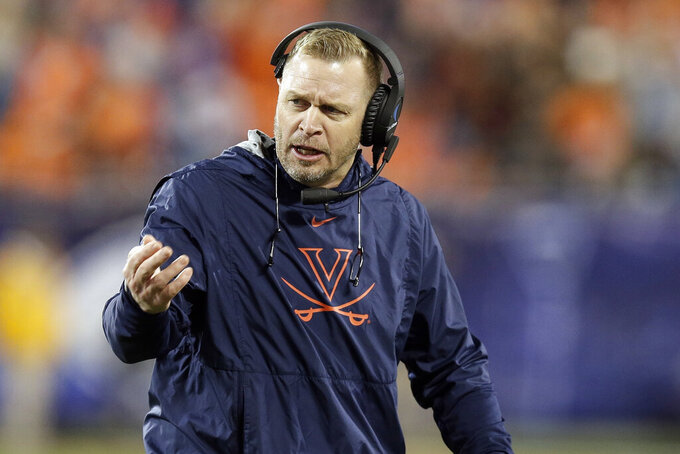 FILE - Virginia head coach Bronco Mendenhall directs his players during the second half of the Atlantic Coast Conference championship NCAA college football game against Clemson in Charlotte, N.C., Saturday, Dec. 7, 2019. One year after dynamic quarterback Bryce Perkins led Virginia to its first Coastal Division title in the Atlantic Coast Conference and a trip to the Orange Bowl, the Cavaliers will put Bronco Mendenhall’s new standard to a big test this season.(AP Photo/Gerry Broome, File)

One year after dynamic quarterback Bryce Perkins led Virginia to its first Coastal Division title in the Atlantic Coast Conference and a trip to the Orange Bowl, the Cavaliers will show how far long Bronco Mendenhall’s rebuilding of the program has come.

Brennan Armstrong will take over behind center, and while the lefthander does not possess the speed or explosiveness that highlighted Perkins’ two years in Charlottesville, he’s been effective enough through training camp to beat out dual-threat graduate transfer Keytaon Thompson from Mississippi State for the starting job.

Armstrong was impressive enough in camp to also be named one of four captains, but will be operating with an offense that has to replace many of the playmakers that made last year’s success possible, most notably Perkins, who led the ACC in total offense.

He will have wide receiver Terrell Jana, one of three Cavaliers with more than 70 receptions last season, and running back Wayne Taulapapa returns after rushing for 473 yards and 12 touchdowns in 2019. The entire offensive line also returns, and with depth that Mendenhall said allows for more options in the running game than in years past.

Jana, a senior, was somewhat overshadowed by Joe Reed (77 catches) and Hasise Dubois (75 catches) at receiver last season, but “was really the leader of the group,” receivers coach Marques Hagans said. “It’s a natural thing to him.”

The group also includes Tavares Kelly Jr., and Billy Kemp IV, who both figure to see more action in the passing game in addition to their roles as kick returners.

“It’s essential, and they are the most consistent, durable and productive players at the receiver group so far,” Mendenhall said. “They’ve taken a really, really nice step forward that I’m so thankful for … The dynamic’s completely different, but it’s clearly noticeable that they’re a stage further than where they were a year ago, which was needed.”

Attrition also has presented the Cavaliers with some challenges.

Four running backs have left the program, and a fifth, promising sophomore Mike Hollins, has opted out of this season for undisclosed reasons, leaving the Cavaliers in a state of significant transition. The school has appealed an NCAA denial of immediate eligibility for Indiana transfer Ronnie Walker Jr., a junior who played in 22 games with the Hoosiers.

Richard Burney, granted a sixth year by the NCAA, returns to anchor the defensive line as a co-captain, and there are eight returning starters and 25 letter winners back bringing experience to the unit.

Another co-captain, Charles Snowden, seems poised for a breakout season, and is accompanied in the middle by top tackler Zane Zandier and Noah Taylor. Three senior defensive backs -- Nick Grant, Joey Blount and De’Vante Cross -- are joined by former starter Brenton Nelson in the backfield.

In all, six of the Cavaliers top seven tacklers are back.

Here are some things to watch with Virginia this year:

Armstrong’s number have been limited, but solid. He was 15 for 20 for 196 yards and one touchdown with two interceptions last year, but could be pressed by Thompson, one of the nation’s top-rated dual-threat quarterbacks when he signed with Mississippi State. He appeared in 20 games with the Bulldogs.

Taulapapa is not flashy -- his longest run last season went for 31 yards -- but Mendenhall loves his grit and nose for the end zone. Fleet-footed wide receiver Tavares Kelly Jr. also figures to have an increased role in the running game after gaining 43 yards on five attempts last season.

Snowden presents problems for offenses with his length -- he’s 6-foot-7 -- and speed, and figures to be the linebacker that follows past stars Micah Kiser and Jordan Mack as the one to watch. He led the nation’s linebackers in passes defended in 2018 and had five sacks among his 72 tackles last season.

The school announced Friday that students will return to campus in September and begin in-person instruction on Sept. 8. Virginia athletics has had five cases of COVID-19, but none since July 24.

The Cavaliers missed out on an opener against No. 4 Georgia and lost their next opener, against VMI, when the Keydets opted out of the season. Mendenhall does not expect to add another game.