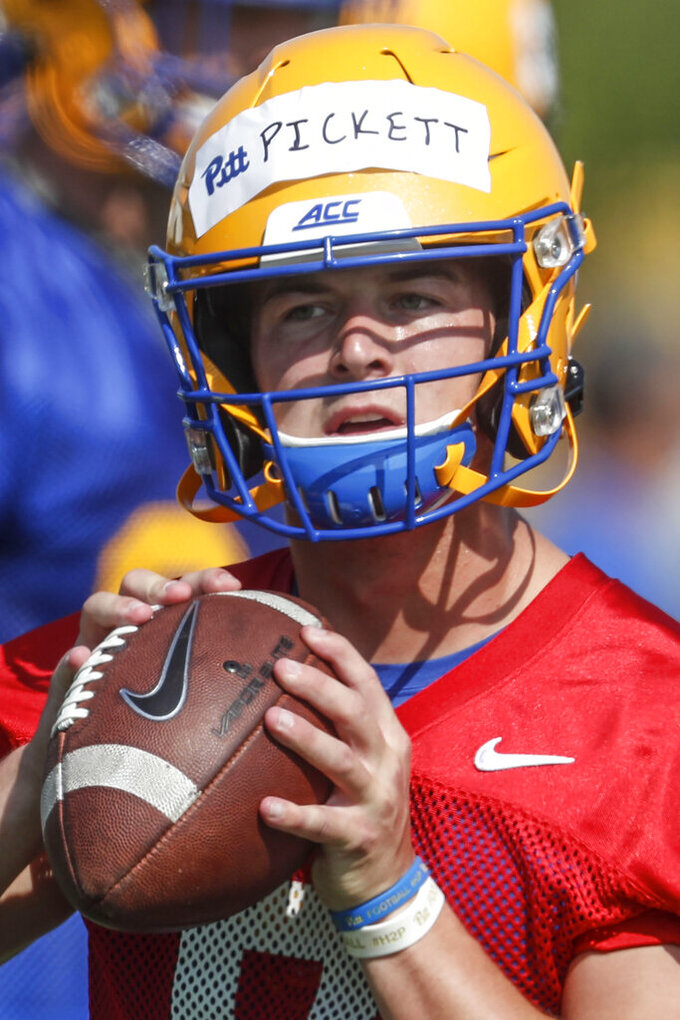 PITTSBURGH (AP) — Bronco Mendenhall's rebuilding project at Virginia appears to be ahead of schedule. Two wins in 2016. Six in 2017. Eight in 2018. Even more is expected in Mendenhall's fourth season. The Cavaliers are the preseason favorites in the ACC's ever chaotic Coastal Division, where nothing ever really goes to plan.

Look no further than Pittsburgh for proof. The Panthers became the sixth different team in as many seasons to win the Coastal when they emerged from a bumpy start to reach the ACC title game for the first time a year ago.

Yet it's the Cavaliers who have hogged the buzz — such as it exists in a division that hasn't won an outright ACC title — heading into Saturday night's season and conference opener at Pitt. Buzz that Virginia quarterback Bryce Perkins knows will vanish quickly if the Cavaliers can't find a way to beat the Panthers for the first time since 2014.

"It's going to be challenging just because everybody's gunning for us," Perkins said. "We'll get everybody's best game. But I think this team and how coach prepares us is definitely in order to handle all that pressure and adversity."

The Panthers, picked to finish fourth in the division, are reloading on offense under new coordinator Mark Whipple. Yet the defense could be the best it's been under head coach Pat Narduzzi even without junior defensive lineman Rashad Weaver, lost for the season during training camp because of a knee injury.

"We've always had that swagger," defensive tackle Amir Watts said. "I feel like we've got a little bit more coming this year."

A little bit could go a long way in a division with little margin for error. Narduzzi insists he doesn't put much stock into projections, but he's not exactly opposed if that means getting to play the underdog card. Asked if Pitt should have been given more respect considering quarterback Kenny Pickett is back as is most of the defense, Narduzzi shrugged.

"Doesn't matter what happened a year ago," he said. "They're the preseason favorites. I don't know if that's media. I don't even know who votes on all that stuff. But there's a reason they're there. There's a reason we're picked fourth. So our guys got to step up."

Some things to look for in a game that could have ramifications all the way to December.

Virginia is replacing tailback Jordan Ellis, who ran for more than 1,000 yards last season as the primary ball carrier, and wide receiver Olamide Zaccheaus, whose 93 catches made him the school's career leader. Establishing replacements will be huge for the Cavaliers, who need to force teams not to focus on Perkins' scrambling.

The Panthers hired Whipple over the winter in an effort to jolt a sluggish passing game. Pitt finished near the bottom of the ACC in nearly every passing category a season ago. And while the success of running backs Qadree Ollison and Darrin Hall — both went over 1,000 yards rushing — played a part in skewing the stats, the bigger issue for the Panthers is that when forced to throw, they couldn't do it effectively.

Pickett believes that's about to change.

"Everyone is getting involved," Pickett said. "Every single route everyone is running to get open because they feel like they're going to get the ball. I think when you watch the film, there's a different kind of speed they're playing with because of it, that element of it."

If Pitt wants to go to the air, it will have to contend with a Virginia secondary featuring cornerback Bryce Hall. Hall led the country in pass breakups (22) and passes defensed (24) in 2018 while being named to the All-ACC first team.

The Panthers are 4-0 in season openers under Narduzzi, but all four have come against lower-division opponents. The last time Pitt began with a Power Five team, it fell to Florida State in 2013 when the Seminoles had freshman Jameis Winston at quarterback.

The Cavaliers have followed a similar pattern. Their last victory over an FBS team in an opener came in 2013 against BYU.