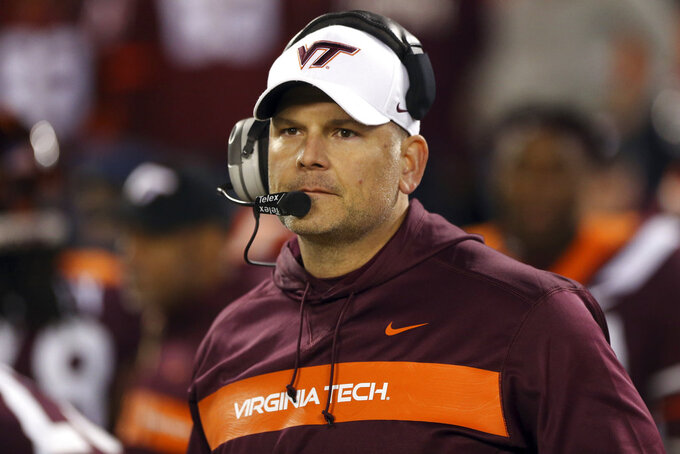 Having already won six more games than in 2017, the Bearcats seek the third 11-win season in the 131-year history of the program and look to even their bowl record at 9-9. Virginia Tech is vying for its third straight victory to complete its 26th consecutive winning season.

Virginia Tech QB Ryan Willis vs. Cincinnati defense. Willis threw 22 TD passes in relief of Josh Jackson, who broke his left leg on Sept. 22. He will be facing a unit that ranks eighth in FBS in yardage allowed (289.9) and seventh in points yielded per game (16.1), permitting only seven points or fewer in five games.

Cincinnati: RB Mike Warren II rushed for 1,163 yards and 17 touchdowns, and had 24 catches for 222 yards and a score. His 81-yard jaunt against Tulane was school's longest rushing TD since 1959.

Virginia Tech: Senior DT Ricky Walker earned second-team All-ACC honors after registering 49 tackles, including 10½ for a loss with two sacks. The 6-foot-2, 300-pounder had seven tackles and a forced fumble vs. Virginia.

Virginia Tech's run of 26 straight bowl appearances is longest active streak in nation and third-longest in NCAA history. Hokies beat Virginia (in overtime) and Marshall in last two games to qualify. ... This is fourth bowl meeting between teams, beginning with 1947 Sun Bowl and including 2014 Military Bowl, won by Hokies 33-17. ... Cincinnati is 8-0 this season when holding opponents to 21 points or fewer. ... Hokies are 25-14 in three seasons under coach Justin Fuente, who took over for College Football Hall of Famer member Frank Beamer. ... Bearcats will lose 13 seniors but have 81 underclassmen, including 52 freshmen. ... Virginia Tech is 22-1 under Fuente when leading at halftime. ... Cincinnati QB Desmond Ridder, the American Athletic Conference rookie of the year, threw for 17 touchdowns and ran for five scores. ... Hokies have won 24 straight when holding opponents to 21 points or fewer, dating back to 2015.