Virginia Tech flexing muscle on defensive end of the court 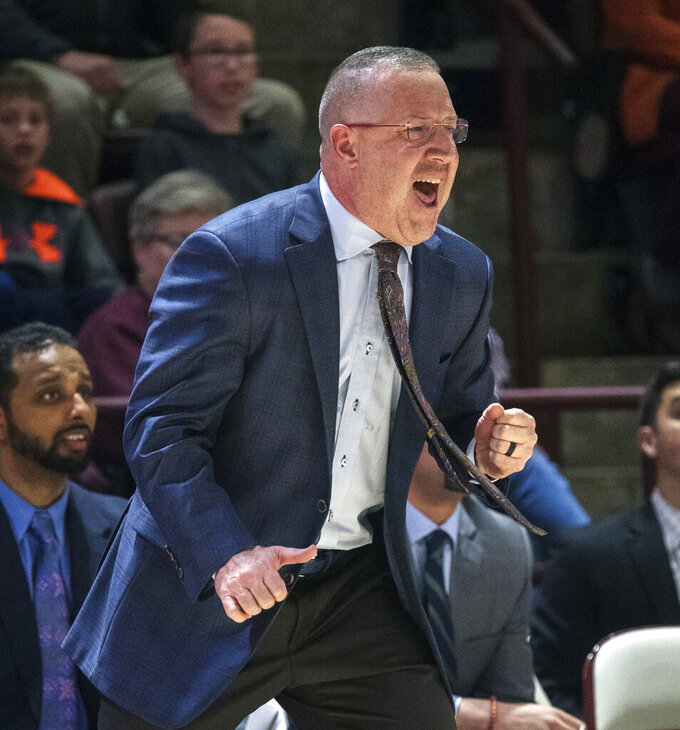 FILE - In this Dec. 5, 2018, file photo, Virginia Tech head coach Buzz Williams yells to his players during the first half of an NCAA college basketball game against VMI, in Blacksburg, Va. Virginia Tech is enjoying one of the best starts to a basketball season in program history, and one of the keys to the Hokies' success has been an increased attention to defense.(AP Photo/Don Petersen, File)

Virginia Tech is enjoying one of the best starts to a basketball season in program history.

The Hokies are ranked ninth in the country and have won 14 of 15 — including nine in a row — heading into Tuesday's game at Virginia.

Part of Virginia Tech's success is that it is playing with more energy and focus on the defensive end of the floor.

"I think their (defense) is a notch up from what I remember last year," Notre Dame coach Mike Brey said after his young Fighting Irish team lost 81-66 to the Hokies on New Year's Day. "We had a really hard time getting good looks against them. They're quick, their pass pressure is up on you, they are physical and can turn you over."

While the Hokies won't receive the notoriety for playing defense like instate rival Virginia deservedly gets, it's a new look for the Hokies. In Buzz Williams' first three seasons as coach, because of a lack of size, depth and experience, the Hokies felt their best defense might have been their offense. Now, attention to both ends might even expand their expectations.

"We've all known they can score, shoot it and spread you out, which they did in the second half against us to put the dagger in," Brey said. "Their defense is a level up, which makes them a contender to win this league."

Just a season ago, playing a schedule that included four Power Five schools and numerous cupcakes, Virginia Tech allowed an average on 71.4 points in nonconference play. Detroit Mercy scored 79 against them, The Citadel 93.

This year Virginia Tech (14-1, 3-0 Atlantic Coast Conference) ranks fourth nationally in scoring defense, allowing 57.3 points per contest. In their latest outing, the Hokies shut down Georgia Tech at home in a 52-49 Hokies victory. The Yellow Jackets were held scoreless after grabbing a 49-47 lead with 3:31 remaining.

Virginia Tech's Top 25 ranking is the second-highest in program history — they were No. 8 for one week in January of 1996 — and the difference, senior point guard and team leader Justin Robinson said, is in maturity and attention to the less glamorous side of the court.

"We lost two great defensive players from last year in Devin Wilson and Justin Bibbs, so we're trying to step up as a group and not be known as two guys that can play defense," he said. "Everybody wants to have a part in it."

Williams said in previous years that Virginia Tech, which has been among the national leaders in shooting percentage since he arrived, basically needed to outscore its opponent because of size and depth deficiencies. That changed this summer when his staff spent more time schooling what is now a deeper, veteran team.

"I think some of those veteran guys recognize immediately when we are out of sorts in what we want to do offensively. We don't have that same comfort level defensively," he said, noting that he calls the defense Cover 2 to honor Monte Kiffin, a football friend and defensive guru. "We are beginning to understand the principle and the philosophy behind Cover 2."

It's evident even in ACC games. Notre Dame, Boston College and Georgia Tech have averaged a combined 60.3 points, all in losses.

The Hokies will have a tough test at No. 4 Virginia, a showdown during which defense will be a focus. Virginia allows just 51.8 points, tops in the nation.

"You're not going to be able to outscore a team every night," Hokies senior Ahmed Hill said. "Everybody knows that in basketball. Now you've just got to try to keep teams to as (few) points as you possibly can. We're a team that can score, obviously, and some nights our shots won't fall. We won't be able to score and we have to rely on the defense to win us the game and I think we realized that as a team and as a program."

One of the new defensive leaders is Wabissa Bede, who played 30 minutes shadowing Boston College's Ky Bowman in a 77-66 Hokies victory on Jan. 5. Bowman, who'd scored 44 against Hartford five days earlier, had just 14 against the Hokies.

"We know if we're all in the right spots, most teams can't really go by us, so if we keep you in front and force you where we want to force you and to take the shots that we want you to take that we can go far," Bede said.

"We know if we keep making you take those type of shots that we're going to have a good chance."