Virginia Tech looking to turn things around against Furman 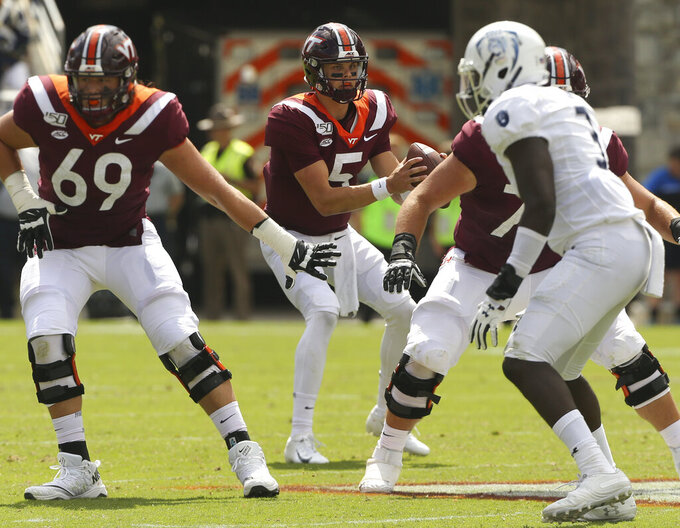 Virginia Tech is once again game-planning to defend the triple option, only this time is not against Paul Johnson and Georgia Tech — it's Furman.

The Hokies (1-1) play host to Furman of the Football Championship Subdivision on Saturday and the Paladins run a version of the triple-option — with a twist. Furman redshirt freshman quarterback Darren Grainger also is adept at throwing the ball.

Grainger threw for 311 yards and four touchdowns with no interceptions last week in a 48-42 loss at Georgia State, which was coming off a stunning opening weekend 38-30 victory against Tennessee.

It's a similar challenge from a different opponent for the Hokies after Atlantic Coast Conference foe Georgia Tech has changed its offense following Johnson's retirement.

"I watched the film last night and their quarterback is playing at an incredible level," Hokies fourth-year coach Justin Fuente said of Grainger. "He runs it, throws it, and then the triple-option spreads you out.

"They do a little bit of everything. I was even more shocked to learn he's a redshirt freshman."

Fuente has experience with Furman coach Clay Hendrix, who objects to his offense being labeled as a triple-option because while they employ that style, they also do numerous other things in the course of a game.

"I don't see us as a triple-option team by any stretch," said Hendrix, who spent a decade as an assistant at Air Force. "It's part of who I am, it's part of who we're going to be whether it's triple-, whether it's double- — find a way to force somebody to be option sound, and then having the ability to throw off of it. ... I think our strength is we are pretty multiple in what we do and we certainly have shown that we can throw the football."

"They had the option and everything else; that's a totally different animal that we got to be prepared for," said Fuente, who coached against Hendrix when Fuente was at TCU and Hendrix was an assistant at the academy.

Defensively, the Paladins have been challenged, allowing an average of 517.5 yards per game.

"We've got to tackle better. We've just got the do the things that we have total control over, being where we're supposed to be," he said, noting that when things get difficult, "we start trying to do someone else's job.

"We start trying to do too much and the next thing, we're not doing our job very well."

They will likely have to do their jobs better on Saturday.

Here are some other things to watch for when Furman visits Virginia Tech:

Virginia Tech has averaged just 114.5 yards rushing per game, a figure that will have to improve to balance things and make it easier on quarterback Ryan Willis. Furman seems like a good opponent to help it happen.

The Paladins' Devin Wynn is averaging 107 rushing yards by himself through two games.

With two FCS opponents — they play Rhode Island on Oct. 12, the Hokies have two FCS foes on their schedule after dispatching East Carolina from the slate following a dispute last season. Only one victory in such games counts toward the Hokies' bowl eligibility, and with a nation's best string of 26 straight bowls, they need this.

The Paladins' incorporation of triple- and double-option sets in their repertoire make them challenging for any opponent, and the added threat of passing effectively out of those formations could make them dangerous.

Teams that are overmatched on paper typically make headlines with a mix of special teams and defensive plays that lead to easy scores. Do the Paladins have a 'Beamerball' performance in their arsenal?

The Hokies would do well to pay attention to WR Thomas Gordon, who has caught 13 passes for 216 yards through two games. He's got just one touchdown, but will definitely be a focal point of the young Grainger.