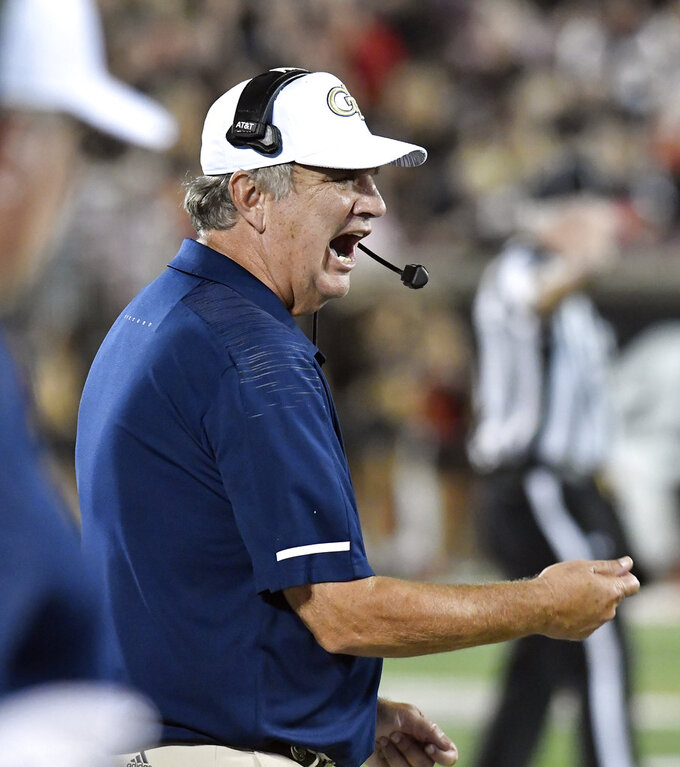 FILE - In this Oct. 5, 2018, file photo, Georgia Tech head coach Paul Johnson shouts instructions to his team during the first half of an NCAA college football game against Louisville, in Louisville, Ky. Georgia Tech has had time to stew during its bye week, but the Yellow Jackets are neither lamenting their tough schedule, ruing a few dreadful losses nor contemplating the complexities required to save their season. The Yellow Jackets (3-4, 1-3 Atlantic Coast Conference) have been working on a seemingly simple skill _ hanging onto the football. (AP Photo/Timothy D. Easley, File)

Virginia Tech is leading the ACC's Coastal Division and has posted all three of its victories on the road.

The Hokies hope to pad their lead when they host Georgia Tech on Thursday night.

"They've got a lot of young guys but they've got some really good athletes and they run well," Georgia Tech coach Paul Johnson said. "Where they've struggled the most is on the back end against passing teams, really."

Hokies coach Justin Fuente said Virginia Tech's scout team has done a good job of preparing the defense for how to defend the triple option, but the one aspect that is more difficult to simulate is the Yellow Jackets' speed.

"I'm always very fearful that on the very first play of the game the defense is going to look over to the sideline and go, 'Yeah we recognized that play but it was executed so much faster than we looked at for the past week,' that they're a step off," he said. "Our kids have embraced that challenge of simulating it."

While the teams are not geographical rivals, Johnson said success has turned the series into a rivalry.

"I think that's what makes it a rivalry," he said. "I've been here 11 years. Eight of the 11 years the team that's won the Virginia Tech-Georgia Tech game has won the Coastal Division. That's the way it's been."

Virginia Tech has won five of those divisional titles, the Yellow Jackets three.

As the lone unbeaten team in the Coastal Division, the Hokies have the upper hand on winning another title this season, and they have the added advantage of playing four of their last five games at home.

Key to that success will be the continued development of a young defense that allowed 49 points against Old Dominion and 45 against Notre Dame , but Fuente said he has been pleased with their growth to date.

Here are some things to watch when Georgia Tech visits Virginia Tech:

Virginia Tech and Georgia Tech are tied for the most appearances on ESPN's Thursday night games with 32. The Hokies have thrived in that scenario, winning 23 of their appearances, including all six against the Yellow Jackets.

Georgia Tech will be trying to become the first road team to win three straight games in Blacksburg since Miami in 1967, 1982 and 1992. Johnson is 4-6 against the Hokies overall, but 2-0 against Fuente's Virginia Tech teams.

Quarterback TaQuon Marshall leads Georgia Tech is rushing with 598 yards and has run for nine touchdowns, but won't be the only signal caller in the game that can do damage with his feet. Virginia Tech's Ryan Willis ran for 88 yards in the Hokies 22-19 victory against North Carolina . Included in that was a 33-yard scoring run.

Georgia Tech lost three fumbles in the final three minutes of the third quarter in its 28-14 loss to Duke before a bye week. Johnson was quick to say the fumbles were not a product of his spread option offense, but "ball security issues" by running back Jerry Howard, quarterback TaQuon Marshall and kickoff return specialist Juanyeh Thomas. He said he and his assistants have "got to do a better job of teaching" players to hold the ball "high and tight."